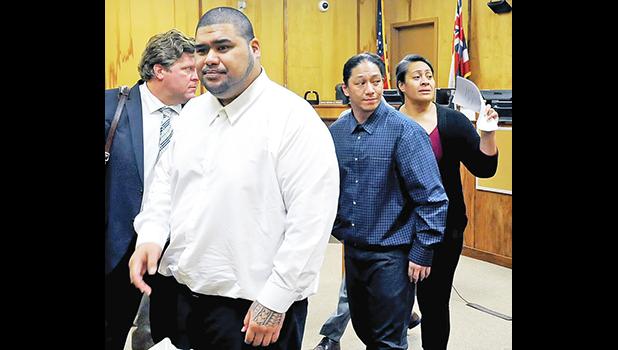 Kealakekua. HAWAII — Jurors began deliberating Friday in the case of an attempted murder of a hotel security guard.

“The defendants acted to kill, a coordinated effort to violently and viciously attack (Kanui) while he was doing his job,” she said.

Lawson explained that all three defendants are charged as principals and or accomplices.

“You can see from the video intentional acts … kicks … punches,” she said. “This is not a reckless act, it’s purposeful.”

Countering the defense’s charge that Kanui struck Tautalatasi in the head, starting the violent confrontation, Lawson replayed a portion of the surveillance video apparently showing the defendant hitting her head on the cart after being pulled off Kanui that caused the injuries the defense attributed to the security guard.

Lawson continued by saying that after one minute, the defendants saw Kanui, who is now paralyzed, lying motionless. They knew what they did, she told the jury, yet Tautalatasi goes back, kicks Kanui and strikes him at least 15-16 times to the head.

She stressed the fact that the attack was confined to Kanui’s head and neck, and the defendants’ conduct was not in question.

“They are all guilty of attempted murder because they all acted together,” she concluded.

The previous day Thursday, Natisha Tautalatasi testified in her own defense.

She indicated that she and her fiance, Lama Lauvao, came to Kona as a getaway in an attempt to salvage their relationship. However, as the day progressed and more alcohol was consumed she became an emotional wreck.

Tautalatasi admitted that the music coming from their vehicle was loud, but they turned it down when Kanui initially approached the group.

“I recall seeing him when he was directly in front of us,” she stated. “I told him, ‘Sir, what’s the problem? We turned the music down.’”

She then said that Kanui told her that she was making noise earlier and that he was going to issue a trespass on the group.

“I was giving him respect and he was being mean to me,” she explained. “Then he said, ‘You f—ing Samoans always making trouble, making noise,’ I was very insulted,” she continued.

She said that it was a reaction to what he said that made her throw a plate of food at Kanui, who was still seated in the security cart.

She testified that Kanui grabbed her and pulled her into the cart where she was hit with something on the head. She said she felt a little dazed, saw stars and blacked out a little bit as she fell backward.

“I told Lama that he f—ing hit me. Everything after that is hazy,” she said of the brutal beating Kanui endured.

Countering the defense’s charge that Kanui struck Tautalatasi in the head, starting the violent confrontation, Lawson on Friday replayed a portion of the surveillance video apparently showing the defendant hitting her head on the cart after being pulled off Kanui that caused the injuries the defense attributed to the security guard.

Also on Friday, Samoa’s attorney, Barry Sooalo, argued it’s all about alliances and obligations, and his client was obligated to get involved when a family member, Tautalatasi, was attacked by Kanui.

Samoa, Lauvao and Tautalatasi do not have to be found guilty of the same charges, rather the jury was instructed to consider each one individually.