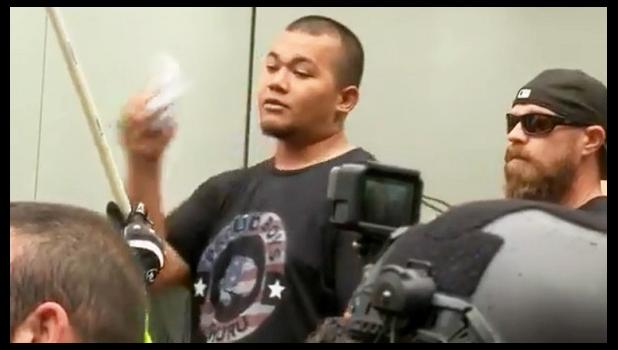 PORTLAND, Ore. (KOIN) -- In a repeat of a clash between Patriot Prayer and Antifa one year ago, hundreds of people converged in downtown Portland last weekend and almost immediately began to skirmish, resulting in three arrests and one other federal citation.

Both Jonathan Feit, 36, and Andrew Arbow, 32, were arrested during the protests and charged with second-degree disorderly conduct. Bryan Neyman was also arrested.

Gregory Isaacson, 43, received a federal citation for failure to comply with lawful order.

The Patriot Prayer protest, dubbed "Tiny's Freedom March" attracted a large faction of anti-fascist groups to Terry Schrunk Plaza, a piece of federal land in the middle of the city.

Throughout the afternoon, pepper spray was used on a handful of protesters. At points along the few square blocks of the march, the Patriot Prayer supporters stopped for a brief rally in between skirmishes. Tiny -- whose real name is Tusitala Toese, a native Samoan who has been arrested at least twice during protests -- spoke a few times.

Toese, who announced earlier he was leaving Portland for Samoa, said Sunday he will only be gone for 2 weeks and when he returns he will once again return to the fray.

After about an hour marching, the Patriot Prayer supporters returned to Terry Schrunk Plaza with Antifa shadowing them every step of the way. The skirmishes continued until about 6:30 p.m.