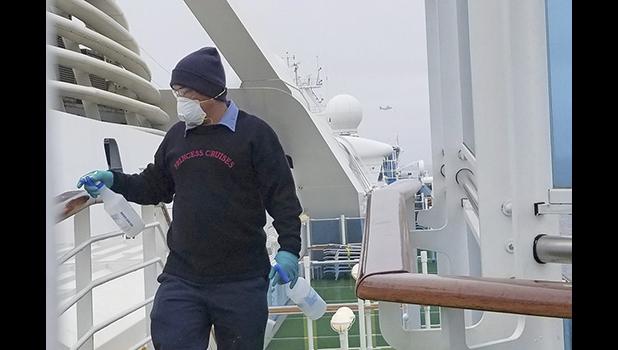 Source: Honolulu Civil Beat
State officials said the Hawaii resident got ill while in the islands and is “now doing fine” at home.

Honolulu, HAWAII — An Oahu man who traveled on a cruise ship that’s been linked to more than two dozen coronavirus cases has tested positive for the virus, Governor David Ige said Friday.

The man traveled on the Grand Princess’ voyage from San Francisco to Mexico in early February, and flew directly home to Honolulu from Mexico. The same ship later docked at four Hawaii ports.

The Department of Health would not disclose the date of his flight from Mexico to Honolulu, what airline he took, or any other details about his age and current situation, but said that he is well and recovering at home.

“This individual fell ill while here in the islands, contacted their doctor, got tested and assessed appropriately and was able to go home and is doing fine at home,” said Dr. Sarah Kemble, Deputy State Epidemiologist at the Hawaii Department of Health.

The man had decided to self-quarantine himself as a precaution, and saw a doctor when he fell ill, DOH Director Bruce Anderson told Civil Beat.

A test conducted Friday at the Hawaii State Laboratory confirmed he was infected with COVID-19.

At a Friday morning press conference in California, federal officials said that at least 21 people on the Grand Princess tested positive on a subsequent voyage that stopped at four Hawaii ports in late February.

Anderson said four Hawaii residents are believed to currently be docked on the cruise ship in San Francisco waters. The Grand Princess is being held in California as authorities work to determine how to disembark passengers and crew members, test all of them and place them into quarantine.

He told Civil Beat it is unknown how many cruise passengers, local or not, got off the boat during each of its four port stops, but federal and state authorities are investigating and will contact anyone they believe came into close contact with them on land.

Vice President Mike Pence said during the California press conference that of those who tested positive on the ship, 19 are crew members. He said the passengers and crew will be brought to a non-commercial port and everyone will be tested for the virus. There are some 3,500 people on the vessel, all of whom will be tested for the coronavirus, Pence said.