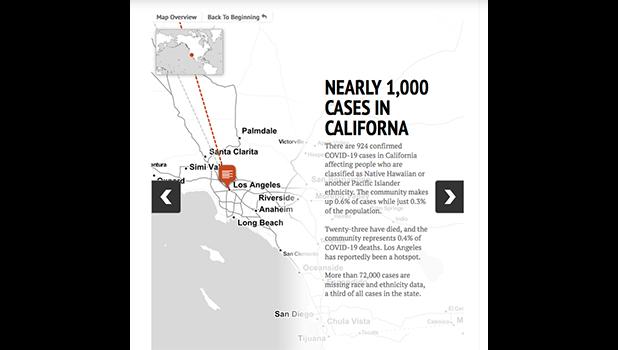 Honolulu, HAWAII — Pacific Islanders continue to face high rates of COVID-19 across multiple states, and in some areas the disparities are worsening.

The Arkansas consul general for the Republic of the Marshall Islands told Radio New Zealand that the virus has already claimed 30 Marshallese lives in Arkansas. Statewide, Pacific Islanders represent 8% of COVID-19 cases even though they compose just 0.3% of the state population.

The Arkansas Coalition of the Marshallese has been raising money to help families affected by the virus.

Spokane, Washington has also emerged as a hotspot. The Spokesman-Review reported that 30% of the county’s cases involve Marshallese people who make up less than 1% of the population.

“The COVID-19 pandemic didn’t create the racial inequities that have contributed to this strikingly high rate of infections among the Marshallese community in Spokane, but it has laid them bare,” the newspaper reported.

The newspaper noted that the Marshall Islands history as a test site for U.S. nuclear bombs “as well as barriers to health care and the federal government’s treatment of people from the Marshall Islands have historically placed the Marshallese community in a vulnerable place to begin with in the United States. The coronavirus pandemic has only intensified the community’s needs.”

“There’s a ton of work that we need to do to fight this disproportionate devastation that our Pacific Islander communities have been facing,” Fele’ai Tau, who co-leads the Hawaii Pacific Islander response team, told Civil Beat regarding Hawaii’s disparities.