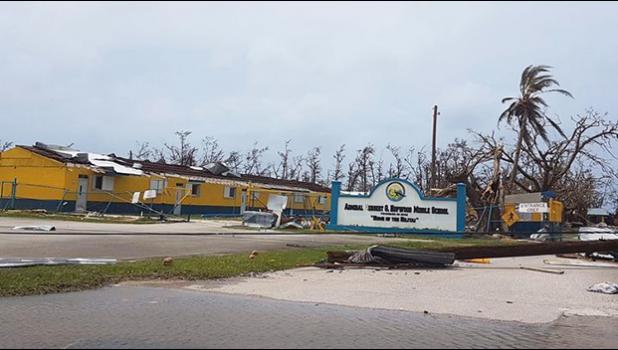 Sipan, CNMI — It could take up to two months for public schools in the Northern Marianas to reopen because of damage inflicted by last week's Super Typhoon Yutu.

They said the worst case scenario would be up to two months off, especially for badly damaged campuses like Hopwood Middle School and William S. Reyes Elementary.

Schools on the southern island of Rota have already resumed classes.

Nearly 870 people on Saipan sought refuge in school emergency shelters and 64 people sought shelter in campuses on Tinian during the storm.

Damage from the typhoon also forced three hotels on Saipan to close temporarily and cancel bookings.

The association says Saipan World Resort was renovating and was already only partially operating prior to the storm.

The Coral Ocean Point Golf Resort Club is severely damaged but hopes to reopen in early 2019.

Pacific Islands Club also sustained major damage but is looking to reopen in about six weeks.

Yesterday Governor Ralph Torres also announced November 15 as a target date for the reopening of Saipan International Airport which has been out of operation since the storm.