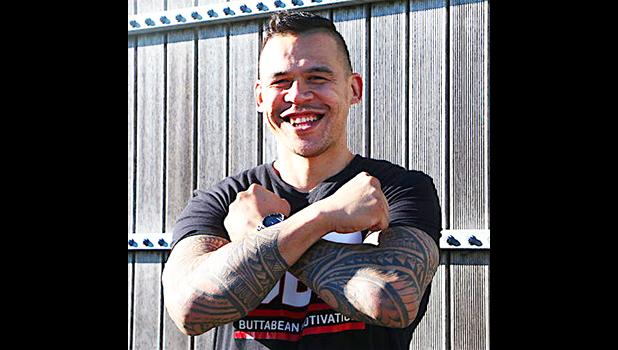 Pacific people in New Zealand often suffer from high blood pressure and are over-represented in statistics for diabetes, strokes and heart disease.

Boxer, David Letele - known as the Brown Buttabean - used to weigh over 200 kilograms and says he was so fat he couldn't tie his own shoelaces.

This, he said, made him realize the path he was on would lead to an early death.

Now, he runs exercise camps in Auckland. He says if he can do it, anyone can.

"[The] best advice is just to start," he said. "Starting does not have to be going out and going to a gym. It can just be getting off the couch and walking to the letterbox. Stop drinking fizzy drinks. Stop eating rubbish. All these things, just start small and bit by bit by bit it all adds up."

Don't let excuses get in the way and at the end of the day, find your 'why' and my why is my children, my life."

David Letele has been inspiring hundreds of others to follow his lead by holding free boot camps in Auckland called 'Buttabean Motivation'.

Samoa's Prime Minister says his country's fine mat weaving program is the only one of its kind and could soon be expanded.

The Samoa Observer reported Tuilaepa Sailele Malielegaoi made the comments last week during the 'Showcasing of Fine Mats' in front of the government building.

Tuilaepa said through the 15-year-old program the government rewarded weavers whose mats remained their property for use or sale.

He said the program's objectives included reviving weaving and sustaining the tradition through the generations, while increasing household income.

The Prime Minister said over the last two years the government had committed about $US500,000 to the program, which would be reviewed later this year and possibly expanded through the use of the internet.

It's that time of the year again where hundreds of members of the Congregational Christian Church of Samoa head to Malua for their annual conference, with subcommittee meetings starting on Monday.

One of the issues on the agenda is the taxing of church ministers, an issue the elders agreed to elaborate on at this year’s main conference.

The pre-meetings have already started.

This year’s theme is “The Spirit of Wisdom in Languages”.

Yesterday, the yearly procession started with the women, where about 200 wives of elderly deacons and ministers and pensioner mothers gathered at the Malua hall to discuss several issues before the subcommittee conference that begins today.

According to the conference program, aside from evening services, today is the Mafuataga Tina’s Annual Service.

The subcommittees for finance will meet Friday, and Saturday is the annual graduation of Malua Theological students as well as the Youth Service.

Beach boy operators on Kuhio Beach defied a city order to vacate their long-standing business fronts on Tuesday amid protests over the selection process for a new vendor.

Employees with Star Beachboys and Hawaiian Oceans Waikiki continued to book surf lessons and equipment rentals on Tuesday despite the order to desist — the same day beach boy concessions were supposed to be handed over to Dive Oahu.

"We're going to fight this tooth and nail as hard as we can, to keep the beach boy tradition alive and keep the beach how it is," said Tony Scarfone, manager at Star Beachboys.

Longtime watermen say Dive Oahu is trying to end the traditional culture of beach boys by cutting their pay and imposing a strict corporate structure, a criticism the company disputes.

"This is a change in management, not in a change of the beach boys, not a change in their culture or lifestyle," said Shelly Rofrits, manager of Dive Oahu.

Rofrits says the beach boys are better off with her company, anyway.

"Overall, it's a better pay scale. Surf instructors, when they're teaching, they're going to be making $30 to $55 per hour," she said.

The dispute will likely come to a head on Thursday, when a state judge will hear arguments over a temporary restraining order that's being sought by Star Beachboys. If they prevail, the existing contractors could remain on the beach until July.

Earlier in the day, dozens of protesters gathered on Kuhio Beach to criticize the city's decision to hand over the five-year concessions to Dive Oahu.

"I'm going to stay here until the end," said Scarfone.

Drug defendant, Teremoana Dan Kamisi, was sentenced to one year and eight months in prison for possession of ice and marijuana.

Afa Lesa represented Kamisi while prosecuting for the government was Fuifui Ioane of the Attorney General’s Office.

According to the Summary of Facts, on 25 August 2017, Police conducted a search of Kamisi’s house where he voluntarily handed over the utensil (glass pipe) to Police.

“The Police then entered the house and found a white plastic bag that contained one marijuana branch weighing 1.0 gram, three straws of different colors, one glass pipe utensil, 44 marijuana seeds, five small plastic bags and two medium plastic bags for the purposes of using for methamphetamines.”

Justice Leiataualesa noted the defendant told the Probation Service when assessed he has no prior convictions.

“You also told me on 11th April when your matter was called for sentencing indication that you had no prior convictions."

“You have a prior conviction for assault causing injury and being armed with a dangerous weapon for which a non-custodial sentence was imposed.”

The defendant’s early guilty plea was taken as mitigation.

'THE ROCK' ASKS FOR DONATIONS FOR FLOOD-RAVAGED KAUAI

Dwayne “The Rock” Johnson is back in Hawaii, and this time he has a special request: He's asking his fans to help support the flood-ravaged communities of Kauai in their recovery efforts.

He posted a video on his Instagram on Saturday saying he’s working with Malama Kuai, a nonprofit organization, to raise funds for the island that was battered by severe flooding in April.

“In Kauai and our Hawaiian islands, we've been devastated by volcanoes, by the earthquakes, by the floods, the rains, and we are working closely with Malama Kauai who's helping our communities rebuild,” he said in the video.

The Rock, who’s currently on Kauai to film the new Disney movie “Jungle Cruise,” said he’s “always so proud to bring a big production back home to the islands. What it does for the people and what it does for the community, it makes me so, so proud.”

He added that he can always feel the “Polynesian spirit, that fighting spirit, the aloha spirit, because we are rebuilding.”