Broadband in Oceania ranks among most expensive in world 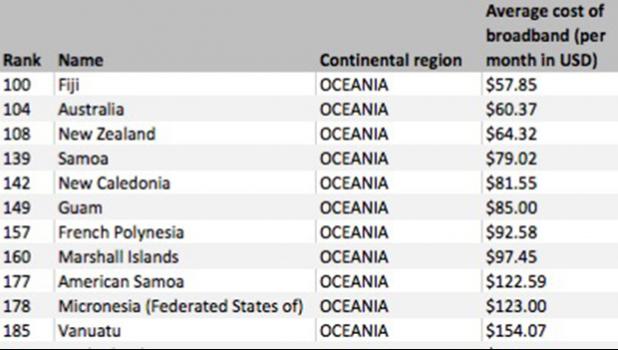 By
Matangi Tonga staff
Countries in Oceania are ranked among the most expensive broadband services in the world according to a worldwide ranking compiled by a UK cable company. Tonga was not ranked among the 13 Oceania countries surveyed due to limited information available.

Data from 3,351 individual broadband packages was gathered by BDRC Continental and compiled and analysed by Cable.co.uk during the eight-week period up to 12 October 2017. The ranking puts the least expensive services at the top of the table and the most expensive at the bottom. Papua New Guinea the second most expensive ranked 195 for a broadband service that costs USD$593.28 per month.

Meanwhile, Cook Islands, Vanuatu, American Samoa, Micronesia (Federated States of), New Caledonia, Samoa, Fiji, New Zealand, and Australia were all ranked 100 and below out of 196 countries. Fiji was the cheapest in the region at $57.45 per month, ahead of both New Zealand and Australia for cost.

At the top of the table, the cheapest broadband prices are found in Iran and Ukraine paying on average around USD$5.36 and USD$5.38 per month respectively. The most expensive broadband in the world is found in Burkina Faso, ranked at 196 paying USD$972.26 per month showing a huge disparity of broadband prices.

Interestingly, the cost of broadband per month does not have anything to do with the speed of broadband.

The country with the fastest broadband speed is Singapore with a download speed of 55.13Mbps according to Cable.co.uk data released in August this year. Yemen has the worst download speed averaging 0.34Mbps.