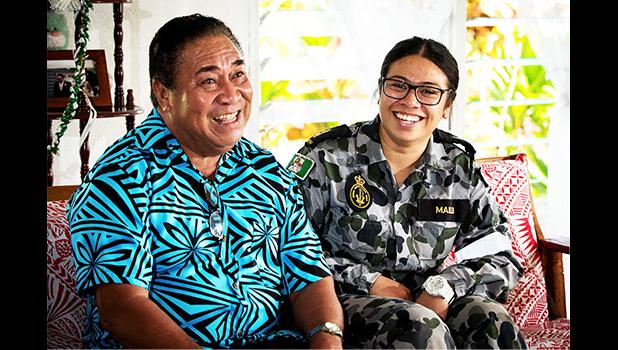 Tuana’i, SAMOA — One sailor on board HMAS Sirius had the unique opportunity to visit her grandfather while in Samoa recently, returning to her home in the small village of Tuana’i for the first time in 12 years.

Able Seaman Boatswains Mate Natasha Mailei is one of the 77 crew members of Sirius who visited Samoa as part of the Pacific Support Force, enhancing Australia’s engagement with Pacific nations and fostering strong partnerships in the region.

The 23 year old sailor has served for three years in Sirius and is responsible for the gunnery department and managing small boat operations on board.

‘I’m glad to be back home,’ Natasha said.

Joined by her father who travelled from Sydney to Samoa just to be there, Able Seaman Mailei’s arrival brought together the three generations of the family.

‘This is the first time in 12 years we’ve actually all been under the same roof,’

Born in Sydney, Able Seaman Mailei grew up in both Samoa and American Samoa until she returned to Australia, completing Year 12 and enlisting in the Navy at age 18.

During her five years in the Navy, the experienced Sailor has completed operational deployments in HMA Ships Perth and Arunta.

But Able Seaman Mailei never imagined in her career that her Pop, Asi Mailei, would have the opportunity to see her in uniform and on Samoan soil.

Able Seaman Mailei’s father, Muliselu Mailei who moved to Sydney when he was 23 said this was actually the first time her family in Samoa has seen “Tash” in uniform.

‘Coming over here to see her is very nice, and I am very proud,’ he said.

But for her Pop, who is the local village chief, the opportunity to see his granddaughter arrive into port was a very rare and special occasion.

Able Seaman Mailei also had the chance to show some of her fellow crew members where she grew up while  they were on the island during some time off.

The crew of Sirius conducted a number of onshore activities whilst in Samoa, including furnishing the athlete’s village that is being used for the 2019 Pacific Games.