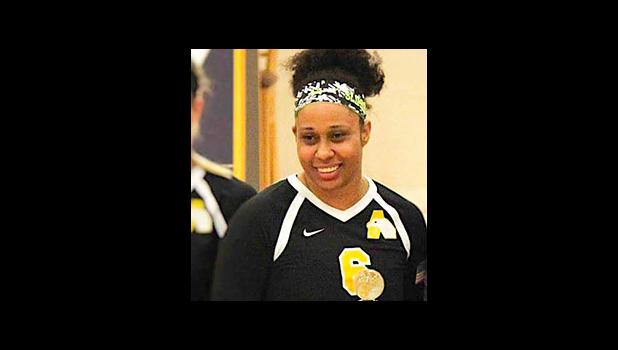 Raleigh, NORTH CAROLINA — The All-Army Sports Office received numerous nominations for the 2017 Army Male and Female Soldier-Athlete and Coach of the Year contest. After a vigorous selection process, SGT Latoya N. Marshall better known by her peers, friends, and family as Salaia Salava'a, of the Raleigh Recruiting BN, Raleigh, NC, was named the Female Athlete of the Year.

Salaia was born in Great Lakes, Illinois on a Naval Base. As she has stated, she is the child of many parents, because it took a village to raise her, mold her, and build her up to be the person she is today.

Salaia is a born athlete. She has always had a love for sports when she could first walk, a coding to the Soldier.

She officially started playing volleyball in the 6th grade while attending St. Theresa elementary school. It was then she was able to tryout and play for Leone Midkiff Elementary and then starting making her mark as a fierce player on the courts during the ASDOE/ ASHAA tournaments.

“As I was growing up I played a lot of sports that required running because not a lot of Samoans wanted to run. I love to play basketball, volleyball, and softball. I used to do track and field but I’m not fast anymore (LOL), and my favorite is cricket during the Catholic youth games every summer,” SGT Marshal said.

Salaia’s journey into the Army started from an article she read about a Female soldier (SSG Panama) that was on the All Army Volleyball team. It was then she realized she wanted to be one of the best volleyball players from American Samoa, and was inspired by the story in making her decision to enlist. At the time SGT Marshall was working for AS SPED as an Assessment Officer, and still aspired to be a professional volleyball player as well as obtain her masters degree in Sports Psychology.

She enlisted, became a United States Army Soldier, worked on her Masters Degree, and has now achieved her goals she set out many years ago to do. “And 6 years later, here I am!” the Athlete said.

When asked about showcasing her athletic talents, she replied, "It wasn’t about showcasing my talent, it was more about what else can my talent help me achieve. I was able to get a degree without having student loans and my talents gave me the confidence to enlist. That confidence and courage has now afforded me what I proudly can share to hopefully inspire many others who have the talent in sports to use their talent to do big things!”

SGT Marshall said, "My advice to the young adults, who are pursuing a career in athletics is to Pray, stay committed, have a positive attitude. Do not give up on your goals. Do not give up on your dreams, always be coachable, and have a winner’s mentality. Give back to our community and most importantly you must EARN what you want in this life. Don’t expect anyone to give you anything for free other than advice, good life lessons, and ways to improve your skills/ techniques.

"As for the young women out there, especially the female athletes from my island of American Samoa, let’s get back to improving our athletics. As a Samoan female athlete I understand the amount of training it takes to be the best athlete. We have to understand that the sports we want to play are constantly evolving each day so we would have to do the same if we want to excel in those sports. If you ever doubt yourself or feel discouraged, just know I believe in all of you that you will succeed if you out your heart, mind, and soul into your efforts to succeed”

Salaia wishes to acknowledge the following, whom have helped shape her life:

“First and foremost I want to thank God for the good health, the knowledge, strength, and blessings He continuously gives me.

“To my Family and friends, thank you for the endless prayers, support, lessons and love. I will forever be in debt to you all.

My commanders for approving me every year since I joined the Army to play volleyball. Without your approval I wouldn’t have the opportunity to achieve this award.

“I would like to thank my coaches and teammates. Without you all I would have not gotten this award. Because of your hard work WE were able to win this award. Yes, I may have won this award but in my heart this is a TEAM award.

“To my battle buddies thank you all for always having my back when I’m gone for All Army Volleyball. Your competence and hard work has made me worry free whenever I had to leave to compete.

“To All Army Sports and the Army thank you all for allowing me to represent the Army through sports. I am grateful for the opportunity I am offered yearly to play for the Army!

“I am grateful and ecstatic about this award I achieved. However, I’ve been more amazed and appreciative about the experiences and relationships I’ve established with other athletes, soldiers, and people of different military branches and countries. Fa’afetai tele lava ma ia manuia!”

Congratulations SGT Marshall on such an achievement and honor. You have done your family and friends proud. The village that raised you now applauds your efforts and triumphs. Your people and country of American Samoa salute you for your accomplishments. Hooah!