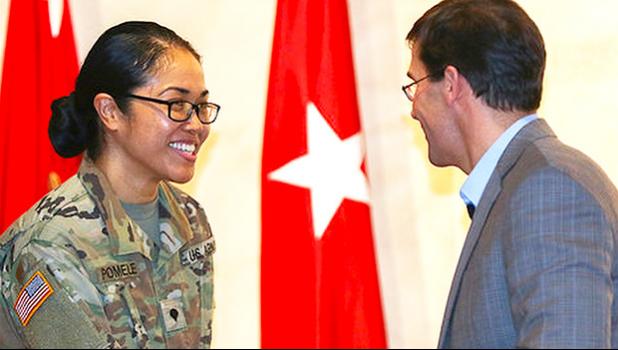 In fact, Sautia-Pomele, originally from American Samoa, just barely made it into the Army to begin with, beating the age restrictions by just one month when she shipped to Fort Jackson, S.C. for Basic Combat Training in July, 2016, at age 34.

Having already established a successful financial career of 13 years and completed a Bachelors in Business Management and a Masters in Business Administration, and as the mother of two teenage sons, Sautia-Pomele thought she had missed her chance.

She had supported her husband's Army Reserve service as an active Family Readiness Group member for more than a decade, getting to know the Army from the outside looking in as her husband's unit went through deployments and training rotations. For her, military service had always been a thought, but never a reality; she had a family and a career to worry about.

That changed when Sautia-Pomele received the heartbreaking news of her father's illness.

"You see, my father is a humble, humble man," she said. "To me, he's the definition of selfless service. Right now he's a minister back home and regardless of any titles or anything, he will get down to the lowest level to do what he can to help others, always bringing fruit from his plantation to the senior citizens in the church and in the village. He would lay down his life.

"So when we received his cancer diagnosis, it was very hard for me to take. He just wouldn't accept the fact that I could help him, that I could take him in for treatment. He didn't want to get in the way. He was satisfied with what I had done to care for him, but I wasn't. I knew I could do so much more."

As Sautia-Pomele struggled to find a way to love and support a father who would rather give help than receive it, she recalled the ways he would talk about military service during her childhood.

"He had so much admiration and respect for the military, but he was never able to join because of his citizenship," she said. "He would always think about what life would have been like if he had been able to join, and it kind of dawned on me.

"I figured if I could do this, if I could join, I could prove to him the good character he instilled in me. He taught me that no matter how rich or poor you are, serving others is the greatest thing you can do for one another. So here I am in the Army."

And that's when the rush to enlistment began.

Sautia-Pomele first walked into a recruiter's office on the island in April, and in order to meet cutoff requirements, she would need to ship by July. That left her with two options: Motor Transport Operator, or Petroleum Supply Specialist.

Following her initial entry training, Sautia-Pomele arrived at Fort Drum in December 2016, and spent a year assigned to the 543rd Composite Supply Company, performing in her role as a Petroleum Supply Specialist. Just recently, she moved to the 548th Combat Sustainment Support Battalion command group, where she now works as an administrative assistant to Battalion Commander Lt. Col. Anthony L. Wilson Sr.

Wilson said he first met Sautia-Pomele after her commander brought him a commission packet on her behalf. When he went to sit down face-to-face with her, he was blown away.

"From the moment I met SPC Sautia-Pomele, she impressed me with her professionalism and humility," he said. "She's a quiet professional who leads soldiers by her example. I'm confident that she'll do outstanding things no matter where she is."

And as Sautia-Pomele pursues a commission as an officer in the medical service corps, she appreciates and values the path she has taken up to now. "I know right now I'm doing things that are completely opposite of what I went to school for and my background and my career, but I don't regret any of it, because I've learned so much in terms of working with the enlisted side and working with the soldiers," she said. "These are the moving hands and feet for the Army, and just seeing them day to day and their struggles, it encourages me. I know how it feels. I've always looked from the outside in through my husband's career, but it's different when you're actually doing it.”

Sautia-Pomele said it's very personal for her when people find out about her credentials and ask, "What are you doing as a 92F?"

"I have my reasons, and they're very dear to me," she said. "It humbles me, and if I ever do get the chance to commission, I won't ever forget what it feels like to be enlisted. I've walked that path," she said.

Besides just the normal everyday struggles of enlisted life, Sautia-Pomele and her family have had to adjust to tremendous changes - from civilian to soldier, from island life to arctic life. And of course, she said, there are the struggles that come from being different.

"I know that discrimination is there. I know that people might look at me differently because I'm an islander, and that sometimes soldiers have different expectations of females, or don't give them the same opportunities as males," she said. "But I can also say that I've been through worse. I've seen it all and I already have that awareness, so I just don't let it bother me. I have already proved so much to myself."

Apart from the Army, Sautia-Pomele uses her free time to take care of her family and to volunteer within the community. From years of work in the Family Readiness Group on American Samoa to regular work with the American Red Cross and her local church community, Sautia-Pomele carries her father's lessons about humility and service into her daily life.

For her outstanding presence and impact on the 548th Combat Sustainment Support Battalion as a woman of exceptional service, the Army selected SPC Sautia-Pomele, along with 4 other female soldiers, to be highlighted by the Department of Defense for Women's History Month.