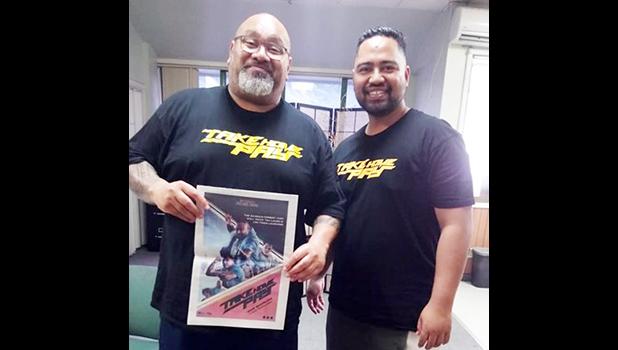 Not only does it star renowned Samoan comedian Tofiga Sefo Fepulea’i, it was also written and directed by Stallone Vaiaoga-Ioasa, the creative mind behind two other popular movies: “Three Wise Cousins” and “Hibiscus and Ruthless”.

‘Take Home Pay’ is Tofiga’s first ever starring role in a film. “I had no idea what it was going to take, or what the end result was going to be,” Tofiga told Samoa News yesterday afternoon, when asked about his leap to the big screen.

According to him, his decision was based largely on the fact the Vaiaoga-Ioasa was behind the film. “I have always loved his work.”

The movie has been screened in Australia, New Zealand, and independent Samoa. It first opened in American Samoa last Friday and the critiques have been nothing but positive.

“I’m just really blown away,” Tofiga said of the end product, adding that he is “especially proud” of the “feedback from my family - mum, wife, and kids. That about sums it all up.”

Tofiga and Vaiaoga-Ioasa say the film is family friendly and is a great movie for people of all ages. “Very rarely will you see grandparents going to the movies to watch a film with their grandkids. This is one of those movies,” Vaiaoga-Ioasa said.

Tofiga is here with his family and they depart the territory next Monday. “My kids, although they have watched the movie already, are asking if they can go watch it again, here in American Samoa. They really enjoy it…”

He said the way the movie has been embraced is quite a “unique experience.”

When asked about his future in the movie industry, Tofiga said with a smile, “I would love to get involved with a second movie.”

So as not to spoil the movie for people who haven’t seen it yet, Vaiaoga-Ioasa summed it up as follows: The story is about two brothers from Samoa who have been selected to travel to New Zealand to become seasonal workers. While there, one of the brothers steals money from the other. The one who stole the money goes on the run. Meanwhile, the victim is planning to return to Samoa but cannot come home empty handed - he wants his money.

In comes a distant relative (played by Tofiga) a 40-something- year-old private investigator who still lives at home with mum and dad.

The movie has been a hit since it opened last weekend, evident in the numerous sold-out sessions. “It’s doing really well here,” said Vaiaoga-Ioasa, adding that those who want to view the film should buy their tickets early.

On October 25th, ‘Take Home Pay’ will open in Hawaii and from there, it is hopeful that it will make its way on to the US mainland.

“We just want to thank the people of American Samoa for their support,” Vaiaoga-Ioasa said. Tofiga reminds the public that he will be at Regal Cinemas in Nuuuli tonight, for a meet-and-greet and photos, prior to the start of the 7:30p.m. show.