Tropical Storm WASI remains on track south, away from territory 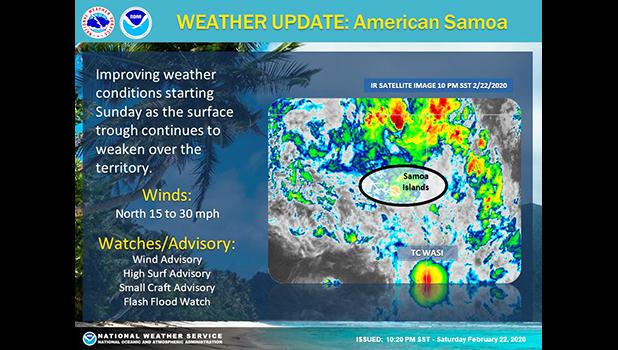 Pago Pago, AMERICAN SAMOA — Weather conditions are expected to improve today (Sunday) as the surface trough that brought active weather over the past week continues to weaken. TC WASI remains its track south, and away from the territory. In the meantime, passing showers and a windy to breezy trend will continue overnight.

The monsoonal trough to the east of American Samoa on Monday will remain in that position through the mid week and will weaken as it will lack proper surface convergence for persistant heavy rainfall. A weak ridge will enter the region that will give theterritory light and variable winds by midweek.

As for now, global models do not show any evidence of tropical systems developing in the new week. However, we still currently have low to mid strength wind shear along with warm sea surface temperatures in the region which makes favorable conditions for development in the region. However, the shear tendency is rising, which will help reduce any development in general, and the convectional showers to the north/northwest of the territory are not showing signs of development.

Also, JTWC (Joint Warning Typohoon Center) does not have an invest in the region.