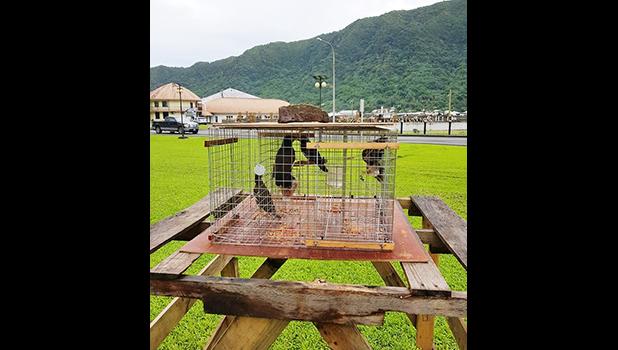 Pago Pago, AMERICAN SAMOA — The Governor's Office, in partnership with the Dept. of Marine and Wildlife Resources (DMWR) has set up traps in certain areas of the territory, in an effort to control the myna bird population.

This trap is located on the Fagatogo Malae, in front of the DPS Central Station.

According to Avele Lalogafuafua of the DMWR Wildlife Division, over 400 myna birds have been captured since the traps were set up earlier this year in Fagasa village, where they started off with 85 traps.

And because the number of myna birds caught in the traps at Fagasa have decreased, the number of traps have dropped to 30. Lalogafuafua said traps are also set up in Fagatogo, Gataivai, and Utulei, where there is a high concentration of myna birds.

"The myna is very territorial," said Lalogafuafua. "They are very aggressive and tend to push out our native birds," like the Samoan starling and the white-collared kingfisher which have had to resort to the mountains.

According to him, the traps can only be set up during nighttime hours, because the myna is "very clever" and once they see humans checking the traps during the day, they will make the connection and leave the area. "When that happens, the process won't work."

Altogether, DMWR has 4 people on staff with the Wildlife Division, and others who assist them, under a program funded by the Governor's Office, to control the myna problem.

Lalogafuafua said in order for them to go out to the villages, they have to go through the pulenuu. He said they have already shared what they know, and what they do, with the Office of Samoan Affairs.

"Once we finish up with Fagasa, we will move to another village. But first, we make sure the villagers can take over the project. But we will always go back and monitor, to see the progress," he explained. He said they can't move at a fast enough pace, because of issues include a shortage of manpower. "We work after hours, at night, because the birds aren't around at that time. The myna can communicate so if they see what we're doing, they will make the connection. In addition, we don't have enough traps."

The traps are built by Lalogafuafua and his crew.

The common myna is an invasive species in areas such as Florida and Hawaii. It is native to southern and southeast Asia. According to the USDA APHIS Wildlife Services, National Wildlife Research Center, "Common mynas are considered pests to fruit crops in many locales, and they are predators on eggs of other birds. Since their introduction to American Samoa in the 1980s, mynas have become the most frequently observed avifauna in developed areas in the country."

In June 2016, about 1,300 myna birds were trapped and put down by DMWR. But the number is not impressive for a bird whose roost population can range from less than 100 to thousands.

The mynas are believed to pair for life, breeding through much of the year depending on the location, and nesting and breeding in protected hollows found either naturally in trees or artificially on buildings (i.e. recessed windowsills or low eaves).

They may wake you up in the morning or can be seen digging through trash.         In 2000, the International Union for Conservation of Nature (IUCN) Species Survival Commission declared the myna as one of the world's most invasive species and one of only three birds in the Top 100 species that pose an impact to biodiversity, agriculture, and human interests.         In Australia, it was named "The Most Important Pest/Problem.”    In Hawai’i, the bird helped spread the Lantana camara weed across the islands’ open grasslands. It was also recorded as the fourth-ranking avian pest in the fruit industry by a 2004 survey of the Hawaiian Farm Bureau, and the sixth in number of complaints of avian pests overall.

DMWR encourages anyone who can identify trees where the mynas roost, to contact their office at 633-4456.