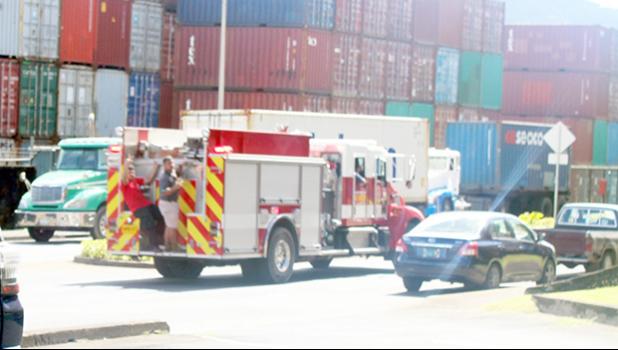 With no sirens working, DPS does an amazing job spreading the word
By
Samoa News staff
reporters@samoanews.com

Meanwhile, ASG was closed for the rest of yesterday following instructions from Gov. Lemanu Peleti Palepoi Sialega Mauga advising all heads of agencies, departments and offices “to immediately release all employees for the rest of the day.

Also ALL PUBLIC SCHOOLS are ordered closed for the rest of the day,” according to a special bulletin at 12:30p.m yesterday from the Emergency Operations Center (EOC).

The PTWC tsunami warning bulletin was immediately communicated by the National Weather Service in Tafuna and the EOC to local broadcasters and on social media, attracting attention and concerns from off island Samoans, who started posting messages of prayers, as traffic in the town area started to move slowly past the Port of Pago Pago, which was shutdown.

In the midst of clogged traffic in town, police in marked vehicles and two fire trucks drove up and down the street announcing the tsunami warning calling for residents to move to higher ground. Police even stopped to tell people still around the town area to heed the advice.

However, instead of heading to higher ground, the majority of motorists packed the road from the town area heading west and also in other areas in the western district.

Word from some of the Western districts spoke of parents getting off from work and rushing to pick up their children instead of going to higher ground. Accounts from the Aoloau area said many parents arrived in their vehicles to pick up their children who were being taken up to higher ground from the surrounding schools. This caused a traffic jam, including chaos — with parents & children — some going up, while others walking or riding down.

The verbal announcements by police from PA systems on the emergency vehicles were used, instead of the territory’s outdoor warning system, which has been out of commission since late last year, as technicians from a contractor in the US mainland have been unable to travel to Pago Pago to conduct a maintenance check and upgrade due to suspension of flights between the US and American Samoa under the local COVID-19 emergency declaration.

With the out-door warning system out of service, the local Department of Homeland Security had already put together a plan to work with local traditional leaders in villages as well as village mayors, and others to get the information out in the event of a disaster.

Schools and businesses closer to the shoreline closed and moved to higher ground. Schools activated their evacuation plans. Samoana High School students and faculty as well as those working in the Utulei area, and others who were at the Executive Office Building in Utulei moved to higher grounds on the hills behind the EOB.

A House committee was in the middle of a hearing with the Human Resources director, when the chairman received word of the tsunami warning. The hearing immediately ended and everyone moved out and up to higher ground.

At the Senate, senators and employees quickly left the compound including crew from Paramount Builders working on the new Fono building.

StarKist Samoa cannery, the largest private employer in the territory, shut down production and employees were evacuated up to the hills of Satala village. The cannery, after the all clear signal was given by local authorities issued an announcement telling workers that the second and third shift yesterday was still on and for employees to please return to work.

Motorists and people who were still on the road in town after 9:30 — when it was already a ghost-town  — were stopped by police and told to move off the road. Police also set up a road block in Pago Pago on the road heading to Fagasa ensuring no one came out of that road.

An hour after the tsunami warning, came the tsunami advisory, but authorities didn’t take any chances and kept people off the road and especially those in shoreline villages. By 11:30a.m. local time, the local Homeland Security Department (ASDHS) — following on the heels of the PTWC — issued an “ALL CLEAR”.

The advisory also said that the governor authorized ASDHS to issue an “all clear” status for American Samoa.

However, police remained at several areas and kept people and traffic off the road, including the Fagasa/ Pago Pago road, which was finally opened to traffic around 12 noon.

There are no reports of damage or injuries but authorities and local residents weren’t taking any chances, following the 2009 tsunami, which killed 34 people in American Samoa and caused major damage. Major areas hit during 2009 were in Pago and Leone.

However, by 1p.m yesterday afternoon, traffic into Fagatogo was moving slowly again as the MV Lady Naomi was at the inter island dock, which was cleared of everyone during the tsunami warning.