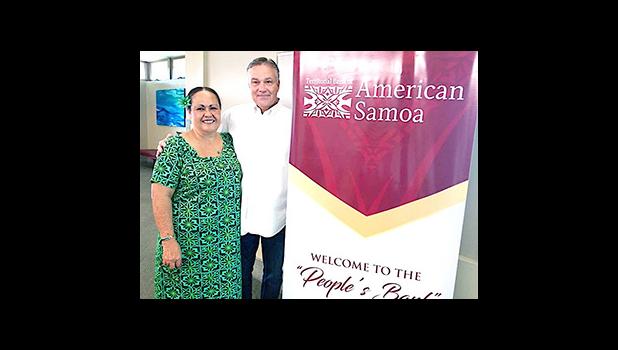 Pago Pago, AMERICAN SAMOA —  “The key to our success is your support…You are the foundation of our success”. These words, according to the Chief Credit Officer of the Territorial Bank of American Samoa (TBAS), Greg Thygesen, is what TBAS is all about. And that is, serving the local community’s banking needs, “because without the community’s support, we would be nothing.”

Thygesen, along with TBAS Chief Operating Officer Makerita Polu, were all smiles yesterday morning when the government-owned bank, headquartered on the first floor of the Centennial Building in Utulei, officially opened its second branch (former site of the Bank of Hawaii Tafuna location) yesterday morning.

It was busy morning when Samoa News stopped by as the doors opened at 9a.m.

West side bank customers were excited that TBAS has finally opened a second branch in their neck of the woods. The teller lines were all manned and according to Polu, all the services available at the TBAS main office in Utulei, are also offered at its new Tafuna location, including new accounts and loans.

“We are just excited and it’s been a busy morning,” Thygesen told Samoa News. He was also proud to announce that currently, TBAS has 8 Automated Teller Machines (ATMs)  — 7 on Tutuila and 1 in Manu’a.

As for the bank’s ATM cards — which have been a subject of much criticism voiced by TBAS customers who are reluctant to ‘swipe’ them because of inconsistencies of when they do or don’t go through — Thygesen said the cards are working “much better” than before.

He thanked All Star Signs and Graphics for helping to set the stage for the new branch, as well as local artist Regina Meredith-Fitiao and the ASCC art students who donated the beautiful paintings that adorn the bank’s walls.

The TBAS Tafuna Branch is open Monday through Friday, 9 a.m. to 3 p.m.