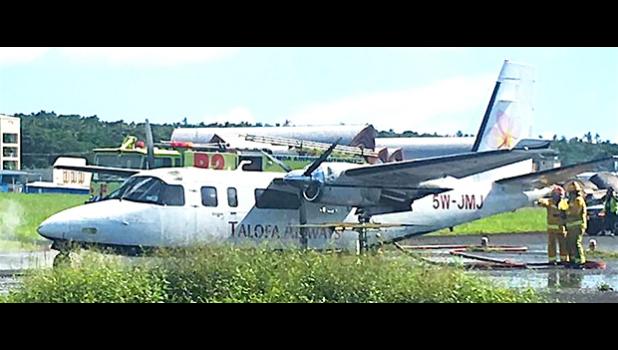 Pago Pago, AMERICAN SAMOA — This photo taken earlier this week shows a Talofa Airways aircraft with two firefighters in the rear at Faleolo International Airport. The airline’s chief executive officer, Toleafoa Jeffrey Hunter has dismissed any claims that one of the plane’s engines had problems or that there was a fire.

A local resident, who was a passenger on board the Talofa Airways aircraft that day, said the flight from Apia to Pago Pago returned to Faleolo Airport because smoke was coming out of one of the plane's engines.

The passenger took this photo as well as another photo (published in the Samoa News Apr. 25th online edition) which shows the plane surrounded by firefighters hosing down what appears to be smoke coming from one of the engines. There was speculation that the plane’s engine caught fire.

Radio New Zealand International (RNZI) quotes Toleafoa as saying that the flight was from Fagalii Airport to Pago Pago but was diverted to Faleolo after the pilot noticed an engine issue. He said the right engine was not responding properly to pilot actions and the plane was diverted so the engine could be checked, but the aircraft would not slow down after landing.

Responding to Samoa News questions from early this week about the incident, Toleafoa said yesterday via email from Apia, “We did not have engine problems or a fire. There were 8 passengers on board. We had to evacuate the aircraft because of a minor brake fire that started when the airplane stopped.”

“Our aircraft is grounded for minor repairs from an overheated brake incident we had at Faleolo. All our passengers traveling between the two Samoas for the next couple of days are being accommodated on Samoa Airways,” he continued. “It may take a week or two before we can start service again, as we are awaiting an investigation of the incident and replacement parts for the aircraft.”

While Toleafoa didn’t elaborate on the “investigation”, RNZI reports that Samoa Civil Aviation Authority has suspended the airline’s services until an expert from New Zealand arrives to investigate the incident.

This is the second known incident involving a Talofa Airways aircraft, with the first one occurring earlier this year in January, when the Twin Commander aircraft was taxing down the runway at Pago Pago International Airport and the main landing gear collapsed.

Samoa News notes there are many travelers who prefer Talofa Airways for inter Samoa travel due to their flights taking only about 20 minutes after the plane is airborne to arrive at either Tafuna or Fagalii.