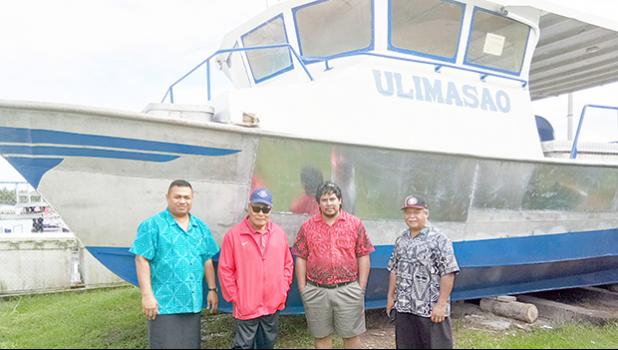 The ASG owned shipyard facility is expanding its workload, using its personnel with specific trade expertise for the alia boat repair project launched last week, and in the very near future, a further expansion with the “super alia” building project.

These expansions at the Satala facility were the “main reason” the shipyard didn’t move forward with providing land at the shipyard compound for a StarKist Samoa cold storage facility, according to Shipyard Authority board chairman Keniseli Lafaele, who is also the Commerce Department director.

As previously reported by Samoa News, the shipyard, following a recommendation from Gov. Lolo Matalasi Moliga, opted not to lease part of the shipyard land to StarKist, to build a new storage freezer and StarKist was offered an option — ASG land where the old Satala power plant was located before it was destroyed in the 2009 tsunami.

“The main reason we couldn't move forward with the expansion of the StarKist cold storage facility into the Shipyard is that the Shipyard is aiming to expand its services to boat repair and building,” said Lafaele responding to Samoa News inquiries following the launching last Friday of the alia boat repair project, a collaborative partnership between the shipyard and the Department of Marine and Wildlife Resources.

“The Shipyard is starting with repairing alias, then moving on to building super alias, the bigger version of the alias, that can fish further into the 50-mile zone and can fish for more than a day — up to 5 or 7 days,” Lafaele told Samoa News on Saturday. “We aim to start an apprentice program in this area of boat repair/building, and other areas vital to sustaining and development of our fishing industry.”

In its report, the Western Pacific Regional Fishery Management Council staff appeared to question ASG's commitment to the local cannery, the largest private employer in the territory, when the governor rejected leasing shipyard land to StarKist for the planned freezer facility. (See Samoa News June 20 edition for details)

The staff report also touched on the ‘super alia’ project, which was initiated by the Council a few years ago and was done in partnership with ASG. The project has since been handed over to the local government, which has now put the price of the construction of one super alia boat at $400,000 while the original price estimated by the Council was about $200,000. (See Samoa News June 19 edition for details)

However, the government, through DOC, is still aiming to get the super alia project launched.

Lafaele said over the weekend that when Lolo was in Apia, Samoa last month, the governor and his team were given a tour of the super alia, longliners, and fishing facilities including the fish market, by Ueta Fa’asili Jr of the Samoa government fisheries division.

Lafaele explained that Fa’asili Jr. is the son of Ueta Fa’asili Sr. who was contracted by the Western Pacific Regional Fishery Management Council to, among other things, start the super alia project in American Samoa through the DMWR a few years ago.

The governor and his team also examined a super alia vessel, ‘Ulimasao’, which belongs to the Samoa government’s Ministry of Agriculture and Fisheries.

As for the alia repair project, launched last Friday during a press briefing by DMWR and Shipyard officials, the repairs cost is funded by federal monies, under the Disaster Relief Fund program, administered by DMWR.

As previously reported by Samoa News - based on testimonies by ASG officials last year - the federal government released nearly $1 million in Disaster Relief Fund in fiscal year 2014 to help revive the local bottomfish fishery after it was significantly affected by the 2009 tsunami, which destroyed a number of fishing boats as well as docks and facilities.

Among the priorities ASG identified to be funded with the relief fund are repairs to local alia boats.  ASG officials had said the Shipyard employs staff with expertise in repairs and should be utilized for the alia repair project as this would also save money as well as expand the workload at the shipyard. The governor strongly supports having Shipyard crew conduct repairs.

Based on assessment conducted by the Shipyard and DMWR, “We’ve noticed that there will be welding repair needed and also carpentry work done on these boats,” said Cheung-Fuk, adding that the first two boats from the project, are “ready to be repaired by the Shipyard. We are very confident that the Shipyard will do an amazing job and we definitely look forward to the end product of these repairs.”

She stressed that “there are criteria for this project and the boats that we prioritize for these first ten [boats], are boats that are actively bottom-fishing.”

Shipyard chief executive officer Moefa’auo Bill Emmesley said during the press briefing that discussions of this joint project between the Shipyard and DMWR started a while ago but “finally came to fruition”, when Va’amua Henry Sesepasara came on board, as DMWR director earlier this year.

Moefa’auo pointed out that “we do have the expertise” to carry out repairs “as well as the shop that does this sort of work.” He said the length of time for repairs for each alia depends on what needs to be repaired.

Anyone with questions on this project can contact Mary Cheung-Fuk at 633-4456.