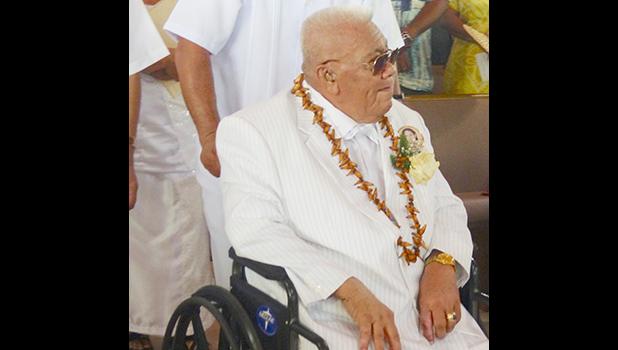 Pago Pago, AMERICAN SAMOA — Senators on Tuesday approved a Senate Concurrent Resolution conveying condolences of the Legislature and the people of American to the children and family of the late High Chief, Aumoeualogo Te’o Fuavai, who passed away last month in Seattle, Washington.

The resolution, which now goes through the protocol of House passage, also pays tribute to Aumoeualogo’s extensive services to his family, district and the people of American Samoa.  The resolution also provides information that many in today’s younger generation don’t know about Aumoeualogo’s history of service to government.

“Aumoeualogo had a very extensive and illustrious career in the American Samoa Government, spanning over 60 years,” according to the resolution, which notes that he was first bestowed the Te’o chiefly title in 1966 and in 2012 was bestowed the Aumoeualogo title.

“His was revered and well respected as a government official with a wealth of experience,” the measure states, noting that he began working in government in 1956 at Port Administration, followed by his term as chief customs officer.

He was elected to the House in 1971 for Vaifanua District #4 for six consecutive two-year terms. “He is most known for persuading the House to create the post of Vice Speaker, and was the first holder of that post,” the measure states.

During his term in the House, he served one-term (1974-1975) as House Speaker and he “was considered by his colleagues as a one-man political party of the Legislature who led with an ‘iron hand’.”

After 12-years of service in the House, he become police commissioner under the Coleman Administration starting in 1982; followed by the Lutali Administration, as he “had garnered a reputation of being a strong leader who was not afraid to make hard decisions,” according to the resolution.

He returned to the House in 1987 for one-term, until he was appointed Public Works director.

During the Tauese Administration, he again served as police commissioner — from 1997 to 2001. The following year, he returned to the Fono as Senator for Vaifanua from 2002 to 2005.

After several years of time off from official duty with the government, Aumoeualogo was “sought after” by the current Senate President to be a special assistant and advisor. “Aumoeualogo’s plethora of knowledge and experience has been a priceless asset to the Fono and its leaders over the last six year,” the resolution states.

Besides his government service, Aumoeualogo was a devout member of the Catholic Church. He was also a traditional leader and well-known in the territory. He was active in the community serving as president of the American Samoa Rugby Union, head of the then-Rainmaker Hotel and captain of the Aoa fautasi. He served as chairman of the American Samoa Republican Party.

Aumoeualogo’s body returned Monday night from Honolulu and a two-day funeral service is set to begin this Sunday. The Fono resolution will be presented during the funeral service.

Before the Senate opened its session on Monday, a moment of silent was observed for Aumoeualogo, who is survived by 10 children, grandchildren and great-grandchildren.