Senate confirms all 3 re-appointments to ASGERF board 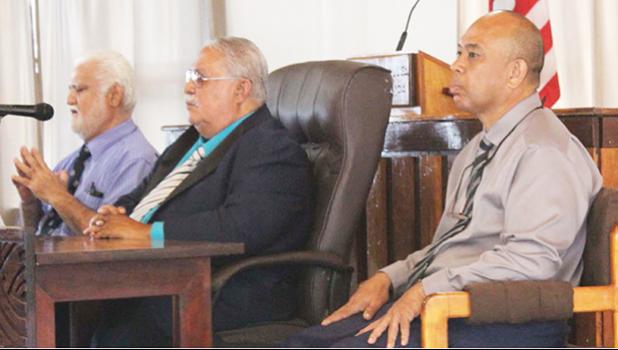 Pago Pago, AMERICAN SAMOA — ASG Treasurer Ueligitone Tonumaipe’a, Sen. Tuaolo Manaia Fruean, and businessman Tony Togiai  appeared yesterday morning before the Senate Retirement Committee for their confirmation hearing after being re-appointed by the governor to the ASG Employees’ Retirement Fund Board of Trustees.

The nominees were re-appointed for 4-year terms each, but the committee amended the term for Tonumaipe’a to two years. During the Senate session, all three were confirmed. The final vote rests with the House, and it is expected soon.

The confirmation hearing lasted about 10 minutes. One of the only two questions came from Sen. Magalei Logovi’i, who chaired the hearing. He asked if the nominees still want to continue to serve on the Board, since they have been re-appointed by the governor. Tuaolo replied, “yes” ’til death.

During the committee discussion, Magalei raised an issue for senators to consider, regarding Tonumaipe’a’s term. He reminded the committee that under the current administration, Tonumaipe’a’s term as ASG Treasurer is only for two more years but his reappointment to the ASGERF Board is for 4 years. Magalei suggested amending the Senate Resolution, which re-appoints the three nominees, to reflect a two-year term for Tonumaipe’a, so when the new administration takes office in January 2021, the new governor can appoint his/ her treasurer to the Board, subject to Fono confi rmation.

Magalei, a former ASG treasurer and former ASGERF Board member, pointed out that when the Lolo Administration took office in January 2013, it was made easy at the time because his term on the Board was expiring then.

Tuaolo agreed with Magalei’s suggestion. Sen. Logoai Siaki Logoai disagreed however, saying he believes leaving Tonumaipe’a in for the full 4-year term, will be a “check and balance” between the new governor and the Board. Current law states that the five-member Board is appointed by the governor, with three who shall be members of the Fund having at least five years of service; and two members who shall not be members of the Fund.