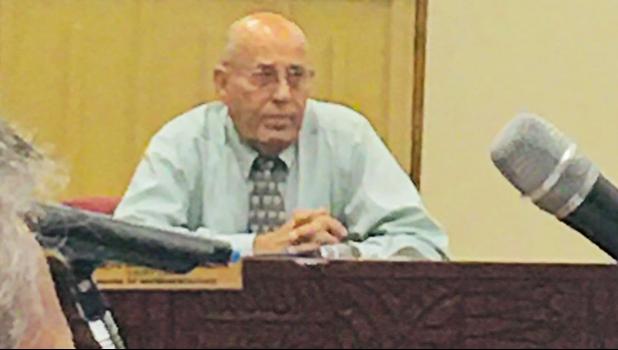 Samoa received the most but no figures for Korea were compiled
By
Ausage Fausia
ausage@samoanews.com

Pago Pago, AMERICAN SAMOA — Representatives were surprised with a report submitted by newly confirmed Commissioner for the Office of Financial Institutions (OFI), Tuasivi John Marsh, which shows the amount of money being transferred from American Samoa to different countries in the world — including Asian countries and Pacific Islands.

Tuasivi appeared before the House Commerce & Economic Development Committee last week to answer questions regarding the updates on the OFI services.

According to a report Tuasivi presented to the committee last week, OFI, the government agency that regulates banks, money transfer businesses and money leaders collected more than half a million dollars from fees and charges from 2019 up until now. The exact amount collected was $568,366.

The fees and charges include a registration and security deposit of $10,000 for each financial institution and money service business plus a fee for every outgoing money transfer at money transfer businesses.

The report shows that there are 13 money service businesses registered with OFI and between March 2020 and June 2020, the only period included in the OFI Commissioner’s report, the amount of remittances or outgoing transfers totaled $3.3 million. According to the statute that established OFI, 50% of the fees stay with OFI for its operation and the balance goes to the American Samoa Government (ASG) General Fund.

When asked why Korea wasn’t on the list when there are a lot of Korean-owned businesses in the territory, OFI Commissioner Tuasivi said when they first started collecting the statistics, Korea was included but somehow Korea was dropped from the list recorded by the money transfer businesses. He assured the committee they are now including Korea again in their data collection.

The basic fee for any money transfer transaction is currently $5 and increases depending on the amount of money being sent out.

Tuasivi said the sole mission of the OFI is to establish and maintain a financial regulatory and supervisory system for American Samoa financial systems, consistent with local and federal Banking Laws and standards. Moreover, OFI promotes a stable banking and financial sector that facilitates economic growth and development within the territory.

It also has the purpose of promoting excellence through strong consumer protection, providing affective regulatory oversight and providing support to all clients supporting our territory.

Vice Speaker, Fetu Fetui Jr said that he’s really surprised with the figures mentioned in the report the OFI Commissioner presented to the committee, given the fact that the period included in the report was only from March to June of 2020. Fetu said the amount of money going outside of American Samoa is huge and it looks like this is from the stimulus funding.

Looking at the amount of money sent outside of American Samoa, Fetu told Tuasivi that the numbers do not look good to him. He said if OFI calculates figures for the whole year, probably they had sent out ten of millions or even more and this is something that the government needs to look into carefully.

Looking at the top five countries on the list, Rep. Avagafono Vaimaga Maiava said that he doesn’t have a problem with people sending money outside of the territory because this is what they earn and they are sending money to help out with their families. But he wanted to know if it would be fair for the OFI to raise the fee, not only to help out with the OFI operation but also the government.

Tuasivi appreciated Avagafono’s concern but he said that increasing the fee is very premature.

“I would find it very hard to recommend an increase in fees,” Tuasivi said.

He explained to the committee that most of the people who are sending out money to their families outside of the territory had an annual earning of a little bit over $12,000 and this earning is going to feed a family of six people or more.

Avagafono thanked Tuasivi for his honest opinion and also taking time to look at the other side of the economy, which is families and people. Avagafono agreed and told Tuasivi that some of these families have only one person who works to feed seven, eight or more people in the family.

Vailiuama assumed that for the whole year’s collections, OFI can earn $2 million, where $1 million will go to the general fund while another $1 million stays with the OFI’s operations. Tuasivi did not agree with Vailiuama’s assumption. He said the numbers are premature and sometimes the figures are not the same month to month.

Rep. Larry Sanitoa wanted to know whether the amount charged by banks to wire transfer is higher or lower than what we’re charging here. Tuasivi explained the bank charge for wire transfers is much higher. Sanitoa said that’s why a lot of people use the service of money transfer businesses to send their money.

Fofo Representative, Andra Samoa acknowledged the service by OFI in collecting funds. She stated that the words mentioned in the statue when the OFI was established two years ago is to “promote strong consumer protection”. She said there are a lot of concerns from members of the community regarding the sudden price increases in several stores.

Samoa said the issue of price gouging in the territory during this time of the COVID-19 pandemic declaration is very serious and a lot of consumers are complaining. For example, a box of chicken was $10 but now its $17 and the same thing applies to various other items.

Samoa also mentioned that with a lot of Korean businesses in the territory why is it Korea was not included as one of the countries receiving remittances from American Samoa.

Tuasivi agreed with Alumamalu about the need to have a money transfer business for the people in Manu’a, however, he said, “we have to grow first and be able to stand on our own before we move to that level. Right now, we’re only just starting but as we grow, then there is a possibility for that request.”

In conclusion, Fetu told the committee that he was very surprised when he looked at Vietnam on the list and the amount of money their people are sending out.

OFI is overseen by a Commissioner, which is appointed by the governor and confirmed by the Fono.