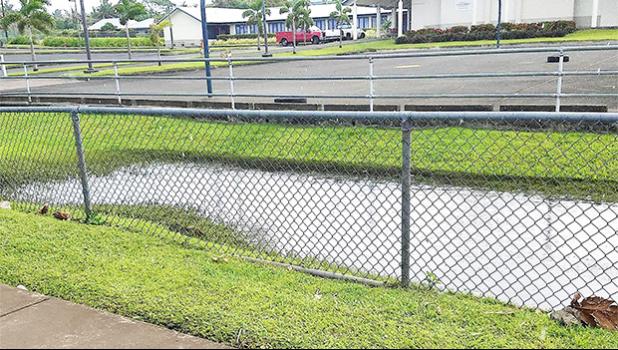 The Department of Public Works remedied (or seemed to have) what has been dubbed the “Mormon Lake” in front of the LDS Chapel in Ottoville, on Tuesday, after heavy rains during the night and early morning hours.

However, a woman who lives around the area witnessed the ASG workers pumping the water out of the ‘lake area’ and into an open ditch that was right next to the road (inside the LDS compound) … now dubbed the “Mormon Pool”.

As seen in the picture taken by the woman and sent to Samoa News, the ‘pool’ is now filled with the water from the road. She noted that this ditch of water would now become a breeding place for mosquitoes and also a danger to young children who are normally playing at the nearby basketball court.