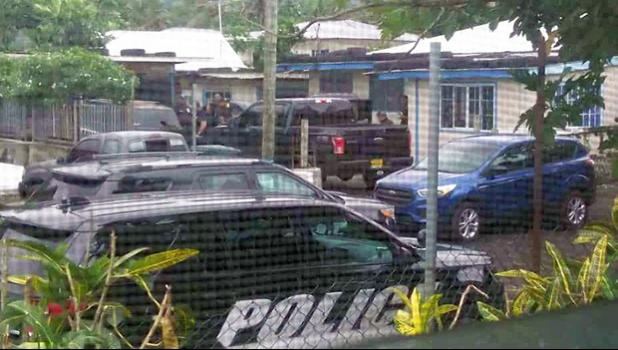 Pago Pago, AMERICAN SAMOA — Detectives from the DPS Vice & Narcotics Units have been praised by residents and neighbors after drugs and drug paraphernalia were found in a search warrant operation in Petesa last Thursday afternoon.

Armed detectives from Vice & Narcotics raided a home last week, as well as along with a vehicle, pursuant to a search warrant signed by the court to search the property that belongs to an individual who has been under police surveillance for quite some time.

DPS sources told Samoa News that this specific individual is allegedly involved in a drug business, and the raid was a part of the Vice & Narcotics Unit’s sting operation.

No illegal drugs were found in the home during the search, however, a large quantity was found inside the vehicle that was included in the search warrant along with the house.

A male suspect was taken into custody for questioning after the raid, and sources told Samoa News that the suspect was the main target of the raid.

Samoa News was also told he has been of interest to the police since the beginning of the year, due to several eyewitnesses from Petesa telling police of a possible drug business going on at the home of the suspect.

Information included suspicious traffic — vehicles and people — going in and out from this specific home in Peseta, mainly at night; and it was alleged that some of the vehicles seen in the area and specifically at this home were government vehicles, as well as belonging to some private businesses.

It was while the police were still working on putting together information, two incidents in May happened — putting the male suspect squarely in the spotlight.

In the first incident that happened on May 16 — the male suspect was one of the two passengers in a pick-up truck, which investigators let go, after the driver was arrested when police found a bag that allegedly contained 8 grams of white crystalline substance and drug paraphernalia under the driver’s seat.

The driver of the vehicle, Pio Atonio was arrested and later charged with unlawful possession of controlled substance (methamphetamine), while the passenger was let go by police.

After the two incidents where the suspect was each time a ‘passenger’, police continued to receive more information regarding the suspect being involved in selling illegal drugs at his home.

When police finally put together solid evidence regarding the suspect, a search warrant was obtained from the court to search all property belonging to the suspect.

Last Thursday afternoon, police executed the search warrant and as a result, a large quantify of illegal drugs were allegedly found inside the vehicle belonging to the suspect.

After being questioned by police, the suspect was then booked and confined at the Territorial Correctional Facility (TCF).

Samoa News understands that the suspect is now being charged, and he will appear in District Court this morning to answer charges against him.