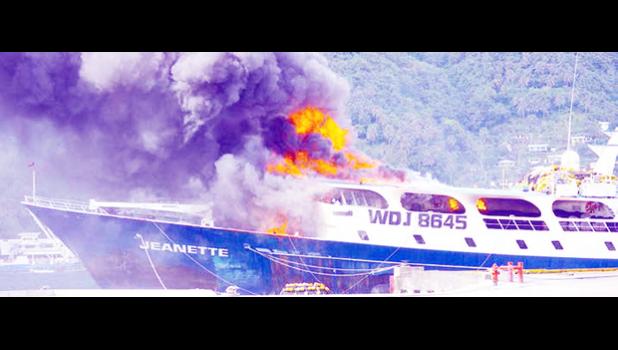 Pago Pago, AMERICAN SAMOA — Smoke was seen billowing from the Fagatogo wharf yesterday morning. Samoa News watched the fire progress into something much bigger within a matter of hours.

What started out as white/ grayish smoke blowing inland into the town area turned into huge flames that engulfed the entire harbor area in a cloud of black smoke. One of the crewmembers who was sitting in the Samoa News parking lot said the chopper caught fire and that’s what caused the blaze to get out of control.

According to a fisheries source, the fire seemed to have started in one of the cabins of the purse seiner, Jeanette, and it spread to the pilothouse. As of press time, Samoa News could not confirm if there were any injuries or deaths.

At around 2:30 p.m. yesterday afternoon, it appeared that the fire was getting under control. Light colored smoke was still billowing from the vessel but that was it.

However, at around 3:30p.m., three ‘pops’ were heard from the Samoa News office — right across the street from the Port.

Within seconds of the first ‘pop’, black smoke engulfed the area and 20-foot flames could be seen from miles away.

Fire trucks that were seen parked next to the vessel earlier on, were now moving away from the vessel — parking towards the exit area of the main dock. Phone lines at Samoa News were down for a few minutes and people were seen evacuating the Port building, finally.

One of ASG’s tugboats was observed moving away from the burning vessel, something that a local experienced shipyard worker said “shocked” him.

“Why wasn’t the vessel towed by a tugboat when the fire started?” a merchant seaman asked. Having worked around boats and shipyards for over three decades, the man said he knows the proper procedure on how to handle boat fires and none of it was carried out yesterday.

By 4p.m., the Jeanette — still on fire — was finally towed out to sea by a tugboat, still on fire with black smoke continuing to billow out.

One shipyard expert who spoke to Samoa News said people should have been alerted to get away from the black smoke, which he said was a result of burning fuel and contains cyanide gas — very toxic. He explained that polyurethane foam is used for insulation in refrigeration on boats and the gas that is produced when it burns is deadly.

The Samoa News source says larger boats (tankers) have a line (hitch) hanging on the bow, which is there so a tugboat can attach to it for towing purposes, in times like this. However, these smaller fishing boats, because of tonnage, may not have those lines so the logical thing to do is to “take an axe to the lines and let the boat go.”  He said there are three types of fires (A,B, and C) and there are certain things you need to bring when trying to contain each specific type. He said it appeared that nobody on board the vessel yesterday had any fire training, and the fire fighters from the local Fire Department were “clueless”.