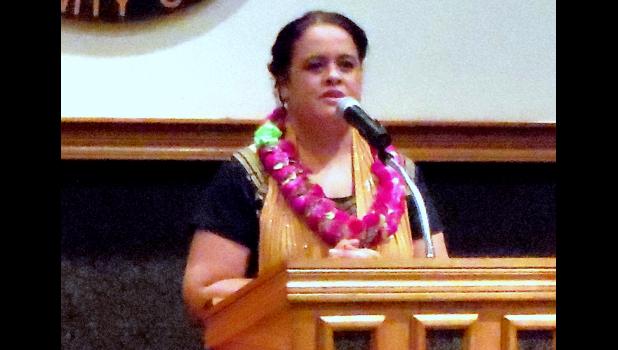 College president: “No identified source of funding to support the law”
By
Fili Sagapolutele
fili@samoanews.com

Dr. Pato, accompanied by board chairman Rev. Sekuini Seva’aetasi and other ASCC officials, also informed the Fono Joint Budget Committee during the recent college FY 2019 budget hearing of the local statute which outlines the minimum appropriation to the college — but has not been met over the years.

While the issues raised by Pato, aren’t new, she has followed Gov. Lolo Matalasi Moliga’s suggestion at last month’s cabinet meeting for Authorities — such as ASCC and LBJ Medical Center — to use the budget hearing process to tell lawmakers their problems and concerns.

As part of the ASCC presentation, handouts were given to lawmakers providing specific details of some of the pressing issues facing the college. Among the issues, is Public Law 22-30 which Pato asked lawmakers to review.

The law states in part that the government shall “provide a minimum appropriation” from local revenues for the operation and programs of the college based “on the actual cost of $2,820 per full time student” with an annual “inflationary adjustment of 4.8% each year,” she explained.

For FY 2018, the ASG subsidy approved for ASCC was $2 million but the Public Law calculation shows a total of more than $17.27 million — an ASG shortage of over $15 million.

Data student enrollment provided by the ASCC — for Fall, Spring and Summer semesters — for Academic Year 2013-2014 showed a total enrollment of 3,419.

The figure continued to decline and in Academic Year 2017-2018 the total was 2,579. There is “decline or decrease in enrollment over the past five years,” Pato told lawmakers.

“Each year the college faces really difficult challenges,” she said, and explained that the college’s academic year begins in August; but the fiscal year commences Oct. 1st. “So we actually begin our [academic] year on the 4th quarter of the fiscal year.”

Furthermore, the ASCC budget planning begins in May but the budget is submitted in July and approved in September. Although the academic years begin in August, funds awarded through Student Financial Assistance — tuition — doesn’t come in until September.

Also, the first ASG subsidy payment “comes in mid October right in the middle of our semester,” Pato explained. “So these are very difficult challenges that we face each year. As we begin our new academic year, these are the things we go through each year.”

“In order to be proactive in the presentation of our budget,” Pato said ASCC also made recommendations for the Fono to consider, especially the difficulty in addressing Public Law Public Law 22-30; as it stands now there’s “no identified source of funding to support the law.”

ASCC, recommends among other things, sources of funding: 2-cents per gallon from the current fuel tax; 2-cents per $1 of the excise tax; and 1-cent from other taxes - e.g sales tax, (if such a tax is implemented).

For FY 2019, the college had proposed $3.19 million in ASG subsidy, but was told by the ASG Budget Office to maintain the FY 2018 ceiling threshold of $2 million. Therefore, there’s a shortage of $1.9 million, which ASCC needs.

“We have continued to try and look at the future of ASCC but it has been very difficult as our budget has decreased each year, but we have so many future visions for the college which are very difficult to put into place without some source of either a steady amount that is appropriated for the college or an identified source to support the vision of ASCC,” she continued.

ASCC provided a breakdown of the $1.9 million, which is needed “in order to move the college forward in this new fiscal year in all the programs and services.. that have been put on hold throughout the years because of the decrease in our budget,” she said.

In the handouts to lawmakers, ASCC detailed the breakdown of how the $1.9 million is to be spent for two specific categories: “Academic Institution-Set Standards and Student Achievement” — which is Eligibility Requirement 11 under the Western Association of Schools and Colleges (WASC) accreditation and the “College and Mission Effectiveness and Integrity” - which is Eligibility Requirement 8 under WASC accreditation.

In response, Sen. Magalei Logovi’i, co-chair of the joint budget committee, said “this is not a new problem” pertaining to the ASG subsidy, as it occurred during his tenure as ASG Treasurer in past years.

However, he said, all he could do at the time was give the college what ASG can provide “because the priority of the government is payroll. And if the payroll is not met, there’s no money to give to you... because we have limited resources.”

Magalei suggested that maybe in the future, Pato can address this, again, with the “Governor, to see what remedy we [can] do to solve that problem.”

Because during the budget process, “all we have to do is go through the budget” but “issues with the college, you need to discuss it with the Governor,” Magalei informed Pato.

Three other lawmakers noted that the ASG subsidy has been a long standing issue for the college but the Fono’s role is to review and approve what’s presented by the Administration.

ASCC’s total FY 2019 budget proposal stands at $11.13 million, and the funding sources include the ASG subsidy, DOI Grant-in-Aid, revenues to be collected at ASCC, and federal grants.