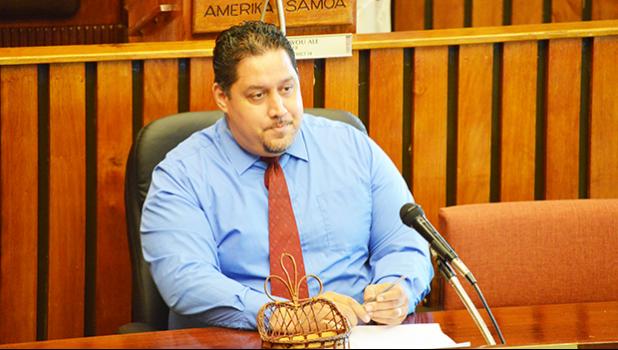 By
Fili Sagapolutele
fili@samoanews.com
A lot of other places treat narcotics addiction as a public health issue not a criminal justice issue, that’s the direction the county is going,” says PD

Public Defender Douglas Fiaui has called for a review of American Samoa’s “harsh” drug laws, saying that the trend in the country — the U.S. — is focused on treating narcotics addiction as a public health issue not a criminal justice issue.

He made the comment during his recent Senate confirmation hearing, as more and more drug cases, including those being allegedly sent through the U.S. Postal Service, have surfaced in court. What has been alarming to lawmakers and many in the community including traditional leaders is the increase in crystal methamphetamine (or ice) drug cases.

Fiaui, who has since been officially confirmed by the Fono for another term as Public Defender, overseeing the Office of Public Defender was asked by Sen. Paepae Iosefa Faiai, “Do you think the law we have on drugs fit the crime? Or is it too harsh?”

He pointed out that in 26 states, the District of Columbia and the territory of Guam, marijuana is legalized for either recreational or medical use.

“I think that’s the way the country is going and our laws don’t reflect that at all. Our laws reflect the height on the war on drugs in the 1980s and the penalties are very harsh,” Fiaui said. “A lot of other places treat narcotics addiction as a public health issue not a criminal justice issue, that’s the direction the county is going.”

“And I think… it behooves us to take a look at that and re-examine our own laws,” he said.

However, Paepae notes, “We’ve got a long way to go” when it comes to designation of marijuana for medical or recreational use “and I don’t think that we have come close to even discussing that. I’m worried about this ice, meth. We will take a look at that.”

The Associated Press reports over the weekend that use of pot remain illegal under federal law, keeping most banks and Wall Street companies out of an industry that could grow from $6 billion to $50 billion in the next decade, according to the financial services firm Cowen & Co.

Some 26 states and Washington, D.C., have legalized the medical use of marijuana, and polls show a majority of Americans support repealing the federal ban on marijuana.

According to the AP, the Trump administration announced Thursday it will step up enforcement of federal law against recreational marijuana, now legal in eight states and the District of Columbia. The crackdown would not pertain to medical marijuana, White House spokesman Sean Spicer said.

During the confirmation hearing, Sen. Fa’amausili Mau Mau Jr. asked about the number of drug cases handed by the Public Defender’s Office and Fiaui said that last year, about two-dozen drug cases, “that would be a ball-park estimate.” He also says that a lot of cases involve simple possession and very few involve distribution, people selling drugs.

“And I think really, that’s kind of surprising to me, because normally what the police are looking for, what they’re going after, are the people who import these things into the territory, people that sell these things to users. And a lot of what we see, coming through our office recently, has been the users of narcotics,” he explained.

Fa’amausili, a retired local law enforcement official, also asked questions about the Territorial Correctional Facility, to which Fiaui said, “What I’ve often seen is the number of people housed at TCF for pre trial detainment.”

In 2013, during his first year as Public Defender, he said there with some 260 inmates at TCF and 107 of them in pre trial detention. “And those numbers have decreased dramatically; last year there were 60 felony cases filed. So overcrowding at the prison has become less and less of a problem, I think, in my experience,” he said.

Fa’amausili asked for Fiaui’s opinion, “the correctional facility is not a jail — right?”

In response, Fiaui said, “It’s both a jail and a facility. It houses people on pre trial — people who have been arrested and accused. It also houses people that are convicted. In other places (jurisdictions), they house them in different buildings, but at the same facility.”

He said, “My thought on the correctional facility is that they need more personnel, they need more guards. They depend a lot on the inmates to control other inmates, which can be problematic, I think sometimes.”

The Department of Public Safety is hoping that the new Police Academy, which opened last week, will recruit more officers, not only for the police force — but for the correctional facility as well.