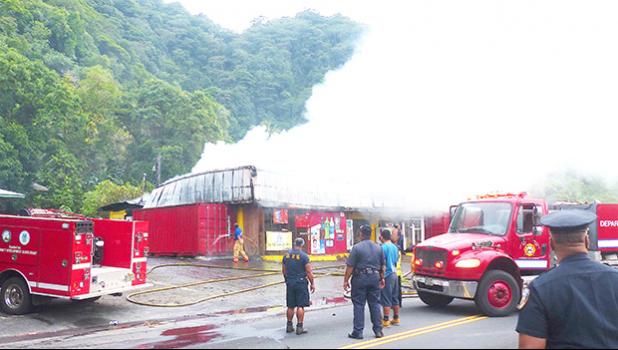 Pictured are fire trucks from the DPS Fire Bureau, along with police officers on the main road fronting Ocean Star store in Nu’uuli where a heavy cloud of smoke is seen. The store caught fire early yesterday morning, causing a major traffic jam, in both directions - heading west and into town. Those heading into town from the west side, claimed to have been stuck in traffic for more than an hour.

Department of Public Safety/Fire Bureau has an ongoing investigation into the cause of the fire. No one was injured.

An eyewitness at the scene told Samoa News that the fire is believed to have started from the back of the store, which opened at 5a.m. The eyewitness further stated the fire started after 5:30a.m. The store’s doors were closed and the Fire Bureau was immediately contacted for assistance.

Those who work at the store, rushed outside to remove the gas tanks and relocate them away from the store. They were assisted by neighbors, who rushed out to lend a helping hand.