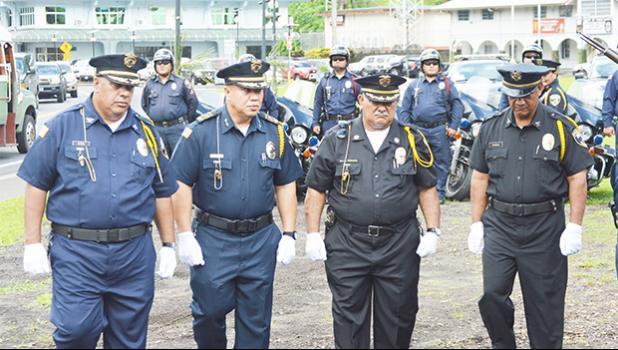 Pago Pago, AMERICAN SAMOA — In an effort to get police officers to be physically fit, Gov. Lolo Matalasi Moliga told cabinet members that the “fitness center” for the Department of Public Safety will be dedicated later this month as part of the government’s annual Workforce Day.

(The other two government projects slated to be dedicated on that day are the Jean P. Hayden Museum and the Fagatogo Pavilion).

Lolo made the revelation at last Friday’s cabinet meeting, but didn’t mention the location of the fitness center; but Samoa News learned over the weekend that it is in the back of the DPS Fire Station in Fagatogo next to ANZ Amerika Samoa Bank.

The governor told cabinet members that there’s no specific place for police officers to utilize for physical training and exercise, and this is the reason for setting up the “fitness center” for police.

The governor, in Samoan, said the deputy commissioner seems okay physically, but the commissioner is a bit overweight, and needs to start exercising.

Lolo said the importance of the fitness center is to keep cops physically fit. He said none of our officers is under 240 pounds, and claims that the lightest cop — in terms of weight — is 241 pounds.

He encouraged cabinet members to get into fitness, and told them they can use privately owned fitness centers, where members pay a fee.

He said this is one of the “critical” and “challenging” matters the government needs to address at this time, and the task force now has about two weeks to complete its report and submit it for review by him, the Secretary of Samoan Affairs, and others.

Lolo reminded cabinet members that the review is for the government to revisit and review how people’s lands were claimed by the government.

“And there are so many reasons why the government needs to take another fresh look at such a serious issue,” which has become a battle between families and the government; and there are also many families who appear not to fully understand how their property was claimed by government,” he said.

Lolo said there are still families who are unhappy with the government taking their land. “If the government took land, it’s important that there is full understanding of how it was done and if it was carried out in an appropriate manner,” he said.

According to Lolo, families whose lands were taken by the government are to report such issues to the task force, so the government can re-examine it and determine how the land can be returned to these families — if the facts warrant such an action.

The task force was appointed on July 25th.

With the start of the new school year approaching, the governor reminded cabinet members of their responsibilities to the schools — both private and public — that they are assigned to. “You need to visit your school and see what needs to be done,” he said.

According to Lolo, there are some agencies who have yet to visit their designated schools and he urged directors to have their agencies conduct site visits and fix what needs to be done before the start of the new school year.