Man robs store, but ends up being tied up 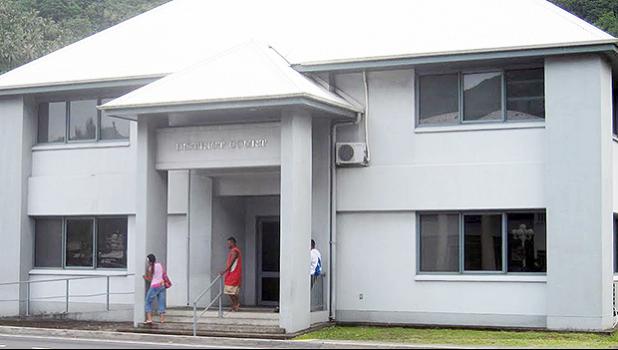 A man who has been accused of stealing goods valued at $9,600 from an Asian store has been arrested and is being held in custody without bail.

Ioane Faimata is charged with 3 felonies:  first degree burglary, possession of a burglar’s tools, and stealing.

He made his initial appearance in the District Court yesterday, and his preliminary examination hearing is scheduled for Thursday.

According to court documents, on Nov. 10, 2017, the owner of Pacific Mini Mart contacted the Tafuna substation for assistance, after his employees caught a man allegedly stealing goods from the store.

Several police officers responded to the call, and when they arrived at the scene, they saw Faimata bound with white rope, surrounded by 7 men.

Police officers untied the defendant, and placed him in a police unit for safety reasons. The defendant sustained minor injuries and he was treated by EMS personnel. When asked by police, Faimata explained that he was coerced by 3 other individuals to commit the burglary.

The owner of the store told police that he recently had been the victim of a string of burglaries at his apartment where numerous cases of cigarettes were stolen by unknown culprit(s). The owner further explained to police that on the night of the offense, he had set a trap for the burglar and stood by with 6 men to protect his property when the defendant entered unlawfully at around 3:00 a.m to 4:00 a.m.

After capturing the defendant and restraining him, they waited for police to arrive, but in doing so, a few of them sustained injuries from the defendant. The owner added that Faimata told them he would remember their faces and he will kill them when he has the chance.

A store employee told police that he was one of the 6 men who helped in preventing the defendant from running away after he was caught burglarizing the premises, and assisted in tying the defendant with the rope.

Police were able to watch the security footage from the camera at the crime scene and observed the defendant with another suspect entering the structure and leaving with cases in a series of back and forth trips. Police officers also observed the defendant in the security footage with multiples cases in his arms, cases he dropped off to a nearby container, before returning for more.

In a written statement to police, Faimata claimed he was coerced into breaking into the premises and taking the cigarettes. The defendant told police he was specifically required to retrieve 6 cases of cigarettes and he carried a knife and crowbar to the store, and had given the crowbar to the other suspect to help the burglary happen.

Faimata remains behind bars without bail.