It's official: 41 cops, and Commish now certified to carry weapons 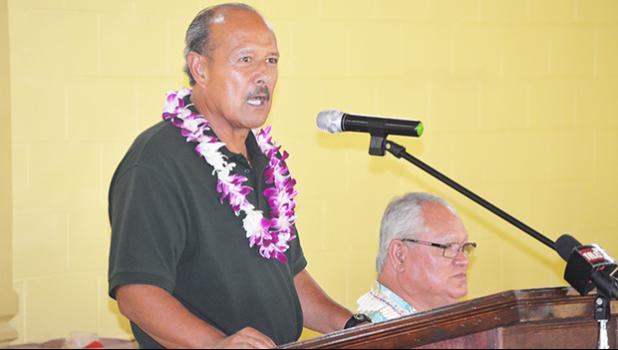 Samoa News should point out that certain police officers — such as those in Vice & Narcotics Tactical Unit — are on call 24/7, which means they are armed 24/7; this would also allow them to take their weapons home.

The 41 officers’ names were called out during a special ceremony held at the Veterans Affairs Office in Tafuna yesterday morning, while government leaders, families, and friends looked on.

Secretary of Samoan Affairs, Mauga Tasi Asuega — who was there on behalf of Gov. Lolo M. Moliga — and a few cabinet members attended yesterday’s ceremony.

Mauga delivered the keynote speech while Haleck and Le’i offered special remarks about the training.

Mauga thanked the Commissioner and the Department of Public Safety for continuing to fulfill their duties, as they were sworn to do.

As a father and a Samoan matai, Mauga advised all police officers to focus on what they have been trained to do, and remember to love one another, respect the elders, and act like a true Samoan. He reminded them that if they want to become better cops, they have to honor God and follow His Word, the Bible.

Haleck, who is from Pavaiai and has spent 40 years of his life in law enforcement, said he has shared with local police, the training he received from the LAPD, for the purpose of helping them fulfill their duties as police officers to protect the community and enforce the law.

As an instructor and trainer of Federal Firearms and Tactics for the National Tactical Officers Association (NTOA), Haleck shared his experience from the trainings he had provided for law enforcement around the United States, which he said is his way of giving something back to the local community.

“And now I’m here in American Samoa to honor these police officers" for what they've accomplished during the 80-hours of training, which included lectures, tests and also the practical phase of using firearms and other tactics as necessary.

Haleck explained that an officer needs a minimum score of 80% in order to be certified and according to him, most of the local cops did better than that; meaning, most of them achieved what was needed.

“As I kept reminding you during our training, it is very important for you to carry out your duties based on your training. Remember to use force only when it is necessary,” Haleck told the cops.

In addition to carrying guns, the cops are also certified to use a baton, pepper spray, and other types of tactics necessary to subdue a person and take them into custody.

Haleck reminded the cops that the use of a firearm should be the last resort, and there is a lot of responsibility needed when the issue comes up in their line of work.

He shared that during his 40 years in law enforcement, he has had to attend 42 funerals of police officers who were killed in the line of duty, and most of them were his partners during his career, and it is something that he never takes lightly.

The next leg of the training session is scheduled for March 2018 and according to Haleck, that's when they will move to the next step, which includes dealing with incidents that may come from outside the territory.

He told officers that it will be hard for them to deal with incidents that may come from the outside, as the nearest help for the local police force is 2,500 miles away, in Honolulu, where FBI is.

Our police officers will be the ones who respond to whatever threat that may affect the lives of own people, he said.

Haleck commended Commissioner Le’i for setting a good example of how an administrator should act to support his crew. Haleck said is it very unusual for him to see an administrator come out every time during training.

"This is a true color of a leader who wants to walk in the shoes of his partner,” he said.

Le’i said, “I have full confidence and trust that you are qualified and have been trained and certified to take the necessary force to prevent any major injuries and the possible loss of lives, especially women and children, and all those who call our office for help.”

All the certified police officers received certificates of recognition; an award of recognition was presented to Haleck for his service.