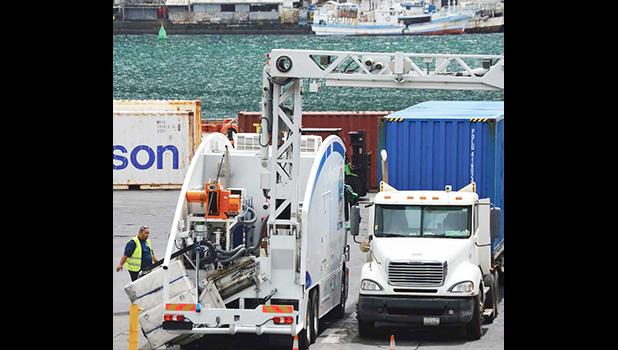 Some of the Customs inspectors are not ‘faithful’ with their job
By
Ausage Fausia
ausage@samoanews.com

Pago Pago, AMERICAN SAMOA — Leasina/ Aitulagi Representative Gafatasi Afalava believes that one of the reasons drugs are entering our borders is that some of the Custom Office Inspectors who are assigned to search containers out in the field are not faithful with their job.

A House Government Operation Committee hearing, chaired by Rep. Vailiuama Steve Leasiolagi was called last week to discuss many issues regarding how illegal drugs are entering into the territory and the process of screening containers using scanners operated by Customs Office.

Those who appeared before the committee to testify in the hearing included Chief of Customs Office, Elisara Pita Elisara; Director of Port Administration, Taimalelagi Dr. Clair Poumele and Deputy Treasurer, Keith Gebauer.

When given the chance to question witnesses, Gafatasi told a story about what he saw in front of an Asian store on the west side of the island while making his way home one afternoon. According to Gafatasi, as he passed by this store, he saw Asian employees unloading items from the container and taking them inside the store while the Customs inspector who was supposed to be present while items are removed from the container was standing far on the other side of the store talking to another man.

Gafatasi said that there should be a person called a field supervisor who can monitor the work conducted by these inspectors to make sure they’re doing their work properly and according to the law.

“After witnessing what happened on that day, I then realized that this is one of the many reasons why illegal drugs are leaking into our territory because some of these inspectors don’t have proper training to do their work, or maybe they’re not faithful in their work,” said Gafatasi, adding that one of the tools the Customs Office needs to have is the use of a K-9 to assist the inspectors with their work.

Gatasi said to avoid any suspicion that Customs inspectors are not faithful in doing their job, he recommends that all containers should be screened and searched at the port before taken to the business to off-load items from inside.

“We depend on you to do the work by protecting our people from these prohibited items including drugs that are entering our beautiful island, but if your inspectors fail and the operation also fails, then we need to find good people to do the operation,” said Gatafasi, adding that he heard rumors that there was a recent incident where a passenger on a flight from Manu’a was caught with drugs. However, he doesn’t know what’s happened to that case.

Rep. Vaetasi Tuumolimoli Saena Moliga echoed Gafatasi’s statement regarding the searching and screening of containers. He said that he strongly believes that containers are one of ways drugs are entering our shore and the employees are not doing their job by screening and searching all the items that are prohibited from entering American Samoa.

For example, Vaetasi said that if you go to an Asian store, you will find a lot of items with labels in the Asian language and that tells you that the reason why items like these get on the store shelf is because the inspector who screened and searched the container did not find it.

“I still hear rumors regarding my people (Manu’a) bringing drugs into the territory,” Vaetasi told witnesses. “I strongly remind you that the law was made for everybody. Whether a government leader or whoever, don’t forget that no one is above the law.”

When asked whether the scanners are useful in searching for prohibited items including drugs, Gebauer responded yes.

Rep. Vesi Talalelei Fautanu Jr said that the government spent almost $10 million for the scanners to make sure no more drugs would enter our territory, but the problem still exists.

Rep. Loia Gutu supported his fellow colleagues statement and told Gebauer to go back to the old process of searching a container on the port before it goes out to the business — to make sure no more prohibited items including drugs float around the island and affect people’s lives.

Gebauer said that the scanners are very useful in searching for everything people try to smuggle inside the territory, but the inspector who conducts the screening is the person who should be responsible for identifying these undeclared items. He also told the committee that there were undeclared items found inside containers during the screening — while our borders are closed.

“So the scanner is a tool just like those inspectors that go to the site to do the job, it’s a tool to help us do the work Customs needs to do,” said Gebauer.

When asked whether Customs has enough inspectors to do the job, Gebauer said that the Customs Office needs additional employees to help the employees already on the payroll.

The deputy Treasurer said that when they open up a new workshop at the airport, they will need more employees to help with the cargo and conduct the inspections.