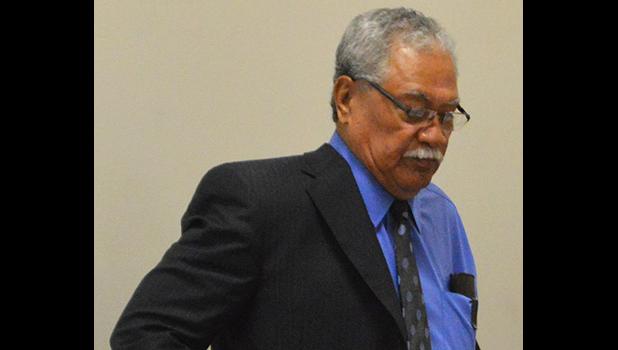 Pago Pago, AMERICAN SAMOA — Issues regarding the off-island medical referral program, and the process of recruiting nurses for the LBJ Medical Center were raised by some lawmakers during the House Session last week.

Rep. Vesiai Poyer Samuelu said a lot of complaints have been voiced by some from the elderly population, on the difference between the way they are treated by Samoan nurses, compared to Filipino nurses.

Vesiai told lawmakers that every time he visits elderly patients in the medical ward, he asks their opinion and views on what the government should do, to make the hospital’s services better, in terms of treatment and management.

He said the people he has spoken to, have said they appreciate the services of Samoan nurses because not only do they speak the language, they also treat them with respect and love.

Vesiai said he salutes all the nurses at the LBJ for the hard work; but the issue he wanted to address is the process of recruiting nurses for the hospital, and the reason why there a so many nurses from the Philippines working at the LBJ.

He said most of the elderly with health issues, who frequent the hospital, only speak Samoan. So it's really hard for them to reveal what services they actually need, when the nurse who is serving them speaks only English.

Vesiai said he has learned from some top officials of the American Samoa Nursing Association that nurses are recruited from off island because there aren't enough locals interested in the field.

He said the number of students enrolled in the nursing program at the American Samoa Community College (ASCC) has been reduced because of limited funding.

The Pago Pago faipule said he doesn’t want the problem that has already happened in other parts of the United States, like Hawai’i for example, where nurses from other parts of the world are filling job positions while locals are unemployed.

“I want our own sons and daughters to train and become certified nurses to serve our own people with love and respect, not people from outside who do not know anything about how to respect our elderly according to our culture and the faaSamoa,” he said.

Rep. Faimealelei Allen echoed Vesiai’s statement and requested a hearing to discuss the issue, so lawmakers can get a clear picture on why there are so many nurses from off island, working at the hospital.

“The lives of our people are important but the future of our sons and daughters is in our hands; so it's our job as leaders to find ways to protect our people and our nation from things like this,” Faimealelei said.

A senior nurse at the LBJ who wished not to be named told Samoa News last week that not enough locals want to become nurses and that’s why the LBJ has had to hire nurses from off island. She said the number of local nurses cannot meet the demands of taking care of the territory’s sick population.

“We've never received any complaints from our elderly patients regarding the services of our nurses from off island, especially from the Philippines,” the source said, adding that they've only received positive feedback on the services offered by nurses.

“We want our dear faipule not to cast stones but work with us to find ways to cure this problem. We also urge parents to enroll your children in nursing studies at the ASCC so they can take care of the sick, here at home.

“We want to spread the good news that nurses are doing a great job at our hospital, which cannot function if not for the nurses. So we have to thank all those in the nursing profession, including those from Philippines, for their great service.”

The senior nurse said the government and the Fono have to find ways to reach out to local young people to spark their interest in the nursing profession, instead of pointing fingers at the services offered by off-island nurses.

“This is one profession where, when older nurses retire, there is no new interest at all. So the LBJ has to find nurses from the Philippines, or from somewhere else. The American Samoa Government, the Fono, and Rep. Vesiai are the major players. They should do what they can to attract young people to this profession."

He then raised the issue regarding the off-island medical referral program, under which locals are sent to New Zealand for treatment, under a new partnership between the American Samoa Government and the New Zealand government.

As an LBJ board member, Faimealelei told his colleagues that he strongly supports sending patients to New Zealand for treatment. However, the issue he wanted clarified is why only patients born in American Samoa are eligible for the medicare program.

Faimealelei said it's very sad to hear from people who have lived in the territory for many years — including those from neighboring Samoa, who have served the government, villages, churches, and have contributed to many local developments — but when they are sent for treatment in NZ under the referral program, they are not eligible for medicare.

“These people have been residing in the territory for over 30 years, paying taxes, contributing to the betterment of our government and also paying medicare; but when they are sent under the referral program for treatment in NZ, they have to pay for their own treatment and accommodations,” Faimealelei said.

“This is not fair to them. Something is not right and we need to do the right thing.”

Faimealelei said he’s not complaining. Instead, he just wants the Fono to know so they can be informed and do something about it.

Chairman of the House Health Committee, Rep. Vesi Talalelei Fautanu Jr said he will look into the matters before a hearing on the issues raised, is scheduled.

Samoa News notes the medical referral program to New Zealand is not a Medicare program, it is a Medicaid program; and according to Medicaid Agency Director Sandra King- Young, when she spoke to Samoa News in November 2017, the Medicaid State Agency’s responsibility is to develop referral procedures pursuant to Medicaid regulations and approved by CMS.

She noted that referral procedures must ensure patient access, fairness, transparency and compliance under the Medicaid State Plan for all Medicaid eligible patients.

King-Young said Medicaid will at a minimum, cover air transport and all medical costs for the patient.

At the time, she said primarily the two hospitals that American Samoa will refer patients to are Mercy Ascot and Braemer Hospital but King Young said whichever hospital the patient needs to go to for services, will also be covered.

The Medicaid program is a reimbursement program and it has a fundamental requirement mandated by federal law.

Samoa News points out that there was no mention by King-Young that only American Samoan nationals would qualify for the program.