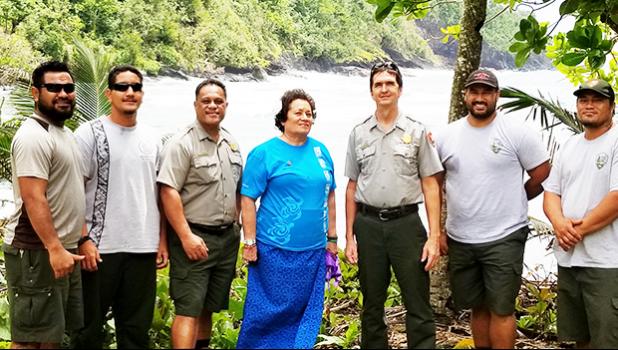 The bipartisan GAOA, which was signed into law this week, is described as the most substantial conservation legislation in a generation, and hailed as “a conservationist’s dream” by the National Parks Conservation Association.

For instance, even prior to this new federal commitment, American Samoa received a $100,000 LWCF grant in 2019 for a local parks recreation project. In September 2018, Amata voted in the Natural Resources Committee for permanent authorization of the LWCF.

The GAOA has two major impacts. First, the new law establishes a National Park and Public Lands Legacy Restoration Fund. Congress established up to $9 billion available nationally over the next five years for deferred maintenance at national parks, wildlife refuges, forests, and other federal lands. Of that, $6.5 billion is designated to the 419 national park units and locations, including the maintenance funding for the National Park of American Samoa.

“Our National Park is a treasure, and as the only one in the Southern Hemisphere, it has unique aspects in its coral species, wildlife and plant life,” continued Amata.

In a second major impact, the GAOA guarantees $900 million per year in perpetuity for the Land and Water Conservation Fund (LWCF).  This flagship conservation program is funded by royalty payments from offshore oil and gas drilling in federal waters, putting that financial support back into conservation. The LWCF was established in 1964 with an authorization level of $900 million, however, until the GAOA, full funding has rarely been appropriated.

In September 2018, Congresswoman Amata voted in support of reauthorizing the LWCF, which supports public lands, parks and recreation areas, and seeks to encourage outdoor activities, including fishing, and it passed the Committee. In March 2019, Congress permanently reauthorized the program through the John D. Dingell Jr. Conservation, Management, and Recreation Act.