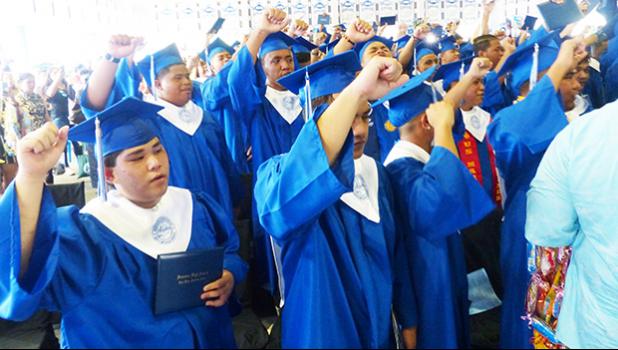 Pago Pago, AMERICAN SAMOA — Traffic came to a stand still yesterday morning following Samoana High School's graduation ceremony. But it wasn't only from cars trying to fight their way onto the main road.

Police presence was heavy on the main road in front of the Samoana HS gymnasium after a uniformed police officer was allegedly struck by a white pickup truck.

Samoa News passed by and observed the officer lying on the sidewalk, with his hands over his face, while a woman was fanning him.

The white truck was escorted to the DPS Central Station in Fagatogo by a motorcycle cop.

Less than a half hour later, two trucks were involved in an accident on the main road in front of the Fono compound, at the four-way next to the District Court.

Samoa News observed a full size white pickup and a smaller black truck on the road, as police officers were trying to divert traffic at the Fagatogo Square.

It appeared that the white truck hit the black truck on the driver's side, resulting in damages to the front part of the smaller truck's hood.

No serious injuries were reported.

With graduation season in full swing, motorists are advised to be cautious when driving. Traffic jams should be expected in the areas where the graduation ceremonies are held.

Graduation seasons in the past have been marred by car accidents, some of them fatal.

Parents are advised to keep tabs on their children's whereabouts and those who operate vehicles are reminded: If you must drink, don't drive.