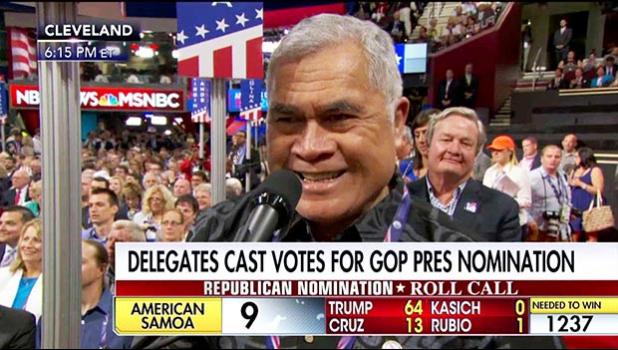 Source: Office of the Gov. of American Samoa

When contacted in Hawaii by the Lieutenant Governor, Governor Moliga said "High Chief Utu's death is a huge loss for American Samoa. His leadership and ingenuity touched and improved the lives of so many people. He had a talent for finding the best people and motivating them to perform beyond expectations. I relied on him and he never let me down. Time and time again, I tasked him to address challenges confronted by my administration and he handled them with the same skills, expertise, passion and commitment that built ASPA into a world-class organization.

"Le afioga i le Matua Utu was American Samoa's renaissance man. Besides constructing and leading an organization worth almost $200 million, the Power Authority served as a model for many of the utilities in the Pacific. He went on to serve as Executive Director of one of these utilities, the Northern Marianas Commonwealth Utility Corporation in 2010. His years of service to our people included but was not limited to his teaching at Samoana High School, holding the directorship for Public Works and Port Administration. He also held the position of CEO of LBJ Tropical Medical Center and President of the Development Bank of American Samoa, and was the first Chairman of the Territorial Bank of American Samoa.

"He represented Saole County as their Senator, ran for Governor in 2008 and was the chairman of the Republican Party of American Samoa in 2016. A viral video of him endorsing President Trump at the Republican National Committee made him into a You Tube star.

"A voracious reader, Utu was often seen scribbling in the margins of books, magazines, newspapers and dog-earing their pages.

"Generous, honest, and visionary were words often used to describe him. Matua Utu helped spearhead and eventually led the Pacific Power Association and Pacific Water and Wastewater Association. He was recognized as one of the'Top Ten Public Works Leaders' by the American Public Works Association in 2001.

"Most recently, he was again retained to be a mentor/instructor for the US Department of Interior's Executive Leadership Development Program. Despite the many accolades and accomplishments, he was a loyal friend and everyone's best uncle and godfather to numerous off-springs of relatives, friends and employees.

"He was also well known for having a soft spot for people down on their luck. While he could have had his choice of lofty positions throughout the world, Utu chose to come home to be close to his family, make the territory a better place to live, and be an advocate for American Samoa. Utu often joked about speaking horrible Samoan but there is no doubt that his life embodied the true spirit of FaaSamoa."

Lieutenant Governor Lemanu Mauga added, "Utu will be sorely missed; we have lost a true son of American Samoa, whose actions and inspiration will continue to light the path into the future. He revered the elderly, encouraged and motivated the youth, and loved his country."