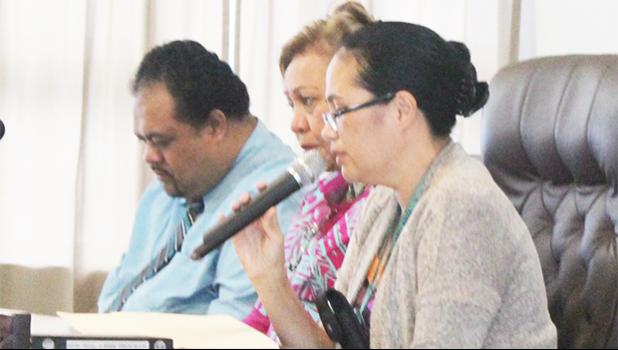 The Senate has endorsed Gov. Lolo Matalasi Moliga’s three nominees to the American Samoa Economic Development Authority (ASEDA); while the Fono is prepared to hold soon, committee hearings on an administration bill to amend a single provision of the local sex offender law, to comply with federal requirements.

During yesterday’s session, the Senate handed down its confirmation vote: 15-1 for Crichton; a unanimous 16-0 for Voigt; and 13-3 for Leauanae.  The final decision now rests with the House, who has yet to announce a confirmation hearing date.

Prior to the Senate vote, the nominees appeared yesterday morning before the Senate Economic Development/Ways and Means Committee for a confirmation hearing.

Because the nominees had not yet had a chance to meet with the current ASEDA board members, senators didn’t pose specific questions pertaining to its current duties and the bonds it sold in 2015 — collecting some $78 million in new revues — with proceeds earmarked for various infrastructure projects.

Sen. Paepae Iosefa Faiai called on the nominees to be honest with the duties assigned to them, once confirmed by the Fono, because ASG has accumulated a large debt from the bonds and it will take up to 20 years to repay it. He reminded the nominees to keep in mind that future generations would be burdened with this debt, if there is a problem with repayment.

While each of the nominees' educational background and work history were not questioned, senators who spoke at the hearing said the nominees must be honest at all times when making decisions as part of the Board, decisions that will impact the territory.

Some senators pointed out that the nominees are in charge of large ASG entities and asked if they will have time to not only serve in their capacity as leaders, but also board members. Each of the nominees responded affirmatively.

If fully confirmed by the Fono, the nominees were told to implement projects that are on top of the list of priorities, instead of projects that come later, as this will result in public complaints.

Speaking on behalf of the three nominees, Voigt informed senators that they don’t take the appointment lightly, and if they can serve the government and the people of American Samoa in any other way, they will do so for the betterment of the territory.

In his nomination letter to Fono leaders, Gov. Lolo Matalasi Moliga said each of the nominees has the relevant experience to help ASEDA, which plays a vital role in the government’s attempt to expedite improvement of the local infrastructure system and establish projects that grow the territory’s economy.

According to Lolo, the nominees will serve as a great asset to ASEDA.

The governor has submitted for Fono approval, legislation to amend the American Samoa Sex Offenders Registration and Notification Act, and the measure was introduced last week in both the Senate and House.

The bill allows American Samoa to be in substantial compliance with the requirements of the federal Sex Offender Registration Act (SORNA).

According to the governor, the local law passed in 2014 closed potential gaps and loopholes that existed under prior law and generally strengthens the nationwide network of sex offender registration and notification programs.

Since 2009, said the governor, states and territories receiving Justice Assistance Grant (JAG) awards from the US Justice Department have been required to substantially implement the minimum standards of SORNA.

Under the territory’s current law, Tier II offenders may have their registration periods reduced to 10 years if they maintain a clean record for 10 consecutive years, but this provision is not in compliance with SORNA, the governor said.

Lolo said the proposed amendment “will allow the government to continue monitoring individuals who have committed more severe sexual crimes.”

Additionally, SORNA “is designed to keep our children safe and the public aware of sex offenders residing within our communities” and the proposed amendment to local law will be in compliance with federal requirements.

The purpose of the ASSOR is to track and register sex offenders who reside, attend school or are employed in American Samoa and to make available information to the public for their use.

The website page makes it clear that “registering information should never be used to threaten, intimidate or harass another.” This information is also in the Samoan language and names of sex offenders can be searched at <americansamoa.nsopw.gov>