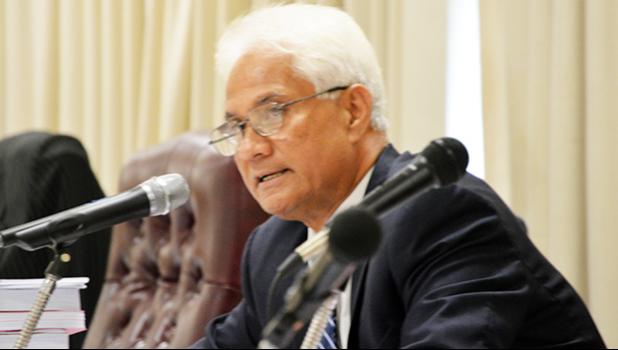 Prior agreement among leaders is why it was not sent for approval
By
Ausage Fausia
ausage@samoanews.com

Pago Pago, AMERICAN SAMOA — Tualauta Representative Larry Sanitoa has questioned the reason why the American Samoa Government (ASG) has not submitted the $164.6 million in COVID-19 grants awarded to ASG to the Fono for review as required by law.

During a House Budget and Appropriations Committee hearing last week, Sanitoa stressed the Budget Act requires all new funding to be appropriated by the Fono.

A complete report of the awards and spending dated August 4th was distributed by Treasurer Ueligitone Tonumaipe’a and Budget Director Catherine Saelua during the hearing, where representatives were able to review the report and expresses their thoughts.

Before Tonumaipe’a could reply, Committee Chairman Vailiuama Steve Leasiolagi said what Sanitoa was asking about had been queried by the committee — apparently there was a meeting between the Senate President, House Speaker and the governor and they had all agreed on how the funding would be spent.

Tonumaipe’a said he was going to give the same explanation given by Vailiuama. He said he was present at the leaders’ meeting and because of the agreement between the leaders, the grant was not sent to the Fono for approval.

Sanitoa said had funding information been brought to the Fono for review it would have resolved all the questions being asked now. Further that is part of the checks and balances between the branches of the government.

He then moved on thanking ASG for the funding that was distributed to all the private schools around the territory, saying that these schools help to educate sons and daughters of American Samoa.

His advised that ASG needs to follow up on how these funds are spent to make sure each school is in compliance. He also said that he doesn’t know whether private schools understand how to spend this funding especially when it comes to federal money.

Sanitoa also asked the treasurer if construction of facilities and roads are allowable costs under the CARES Act. Tonumaipe’a responded yes; if the buildings are used for COVID-19 response, such as to quarantine people, it’s allowable. If roads are connected to the care of patients it’s also allowable.

Fofo representative Andra Samoa questioned the difference in the amount of funding mentioned in the June 15 report to the Fono and the last report the treasurer and the budget director presented to the committee.

Rep. Timusa Tini Lam Yuen asked if these funds could pay for a charter flight to bring our people who are stuck in Hawaii if the borders are opened? Tonumaipea said, yes.

For example the Department of Health: They received $6.6 million but their total expenditures are $332,633, with the balance of $6.3 million.

Timusa advised the treasurer to inform these departments to use their funds because they are blessings from God. He further stated that we hadn’t expected to receive this huge amount of funding this year.

Total funding that ASG has been awarded in COVID-19 grants is $164.6 million of which $69.7 million has been spent.

Looking at the grant of $35.1 million that ASG received under the CARES Act as of July 31, $16.4 million, it has been spent on COVID-19 operations, which include payroll for ASG personnel related to coronavirus response, stipends for the Coronavirus Task Force and Working Group, and construction of quarantine facilities and charter flights operated by Samoa Airways.

It also includes the $500,000 each given to the High Court and the Fono, payments given to families that own land in Nu’uuli for the alternate road project, and the Leapaga Family for the Fagaima to Malaeimi road project.

The report lists $200,000 to the Soliai family and $75,000 for the Leapaga Family. (KHJ News points out that a spokesman for the Soliai Family says they have not received this money.) The latter payment is for the road from the intersection of Fagaima and Kokoland road linking up to the Malaemi highway.

With regard to the half a million paid to the Fono for lawmaker’ offices, Treasurer Tonumaipe’a said that after being told by the Inspector General’s Office of US Treasury that the funds should be returned, he has charged this funding to ASG’s local account while he awaits a discussion with the Governor on how the funds will be collected. The Fono leaders received $20,000 while members received $10,000.

When asked about returning checks from Fono members, Tonumaipe’a said only two lawmakers have returned the funds. He didn’t name them but the two are Pago Pago Faipule, Vesiai Poyer Samuelu and Sanitoa.

The stipends for the Coronavirus Task Force and Working Group total $122,000.