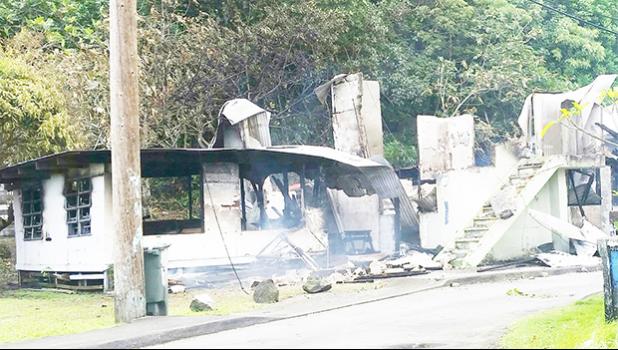 Last Thursday morning, firefighters and first responders were called to Laulii, after receiving calls that a two-story home located only a few feet away from several power lines was burning — rapidly.

According to witnesses, the fire started in the corner bedroom of the home, and quickly spread throughout the entire structure.

It didn't take that long for the second story to collapse to the ground.

Government employees who were on the east side to carry out work for the Adopt-a-School initiative were the first to see the fire and stopped to render aid.

The biggest concern had to do with a vehicle that was parked only a few feet from the flames. Bystanders were worried that if the car caught fire, a huge explosion would result.

The homeowners were in their new home, located directly behind the burning house, and they were unaware of the blaze until crowds of people started gathering nearby.

The home is within spitting distance of an abandoned home, and another house.

Help came fast, but not fast enough to save any of the contents.

Samoa News understands that the homeowners had recently moved into their new house, but their belongings were still in the home that had burned down.

By the early evening hours on Thursday, smoke from the fire was still circling the site.

It is unclear at this time what caused the fire. Fortunately, nobody was hurt.