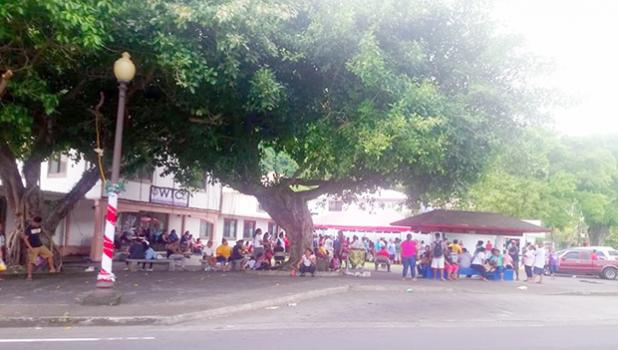 By
B. Chen
blue@samoanews.com
Local residents urged to ‘wait for a phone call’ before showing up to get your DHSS voucher

The program, according to DHSS director Muavaefaatasi John Suisala, will infuse an additional $1.4 million per month into the local economy.

Applications were accepted at five sites on Tutuila and one in the Manu’a Islands beginning in October.

A lot of paperwork is involved, and those who applied have been told to wait for a DHSS representative to call them, before they stop by to pick up their vouchers. But Muavaefaatasi says this isn’t stopping people from showing up.

“Some of the people who are sitting under the tent at the DHSS compound include those who haven’t been approved yet, those who have been denied, and those who simply refuse to leave until they get the answers they want to hear,” Muavaefaatasi told Samoa News yesterday afternoon over a telephone interview.

The process is tedious. Muavaefaatasi explained that so far, their office has received almost 8,000 applications and it takes 45 minutes to an hour to review and complete one application. “It takes longer if the applications are incomplete,” he pointed out.

Muavaefaatasi stressed that only those who have been contacted by DHSS and have received their photo IDs can pick up their food vouchers. “But we are now faced with irate people who just show up and sit here all day, even after they are told that they need to be contacted first, and they must already have been issued a photo ID,” he continued, adding that some residents have threatened his staff members, even himself.

According to the DHSS director, applications up to November 4th have already been reviewed and therefore, those who applied between October and Nov. 4th, and were approved, contacted by DHSS, and issued an ID, are the only ones who should be at the DHSS compound picking up their vouchers, which are retroactive and cover the months from when the application was completed and approved.

For example, a person who applied in October and has since been approved and issued an ID can pick up his/her vouchers for all three months (October, November, December).

This means that a person who applied in November - even if they aren’t approved and issued an ID until January - will be issued vouchers for all three months (November, December, January), according to Muavaefaatasi.

He pointed out that some applications from October are still incomplete, and they are working to get those squared away, because retroactively, they can only go back a maximum of two months.

As for the crowd that is forming in the DHSS parking lot, Muavaefaatasi said that in accordance with the governor’s emergency declaration, only those who can provide proof of immunization (14-days prior) are permitted to enter the DHSS office. “We aren’t turning anyone away though,” he said. “Those who cannot show proof of being immunized are being served outside, under the tent.”

“We are just following the provisions set forth under the governor’s emergency declaration,” he added.

Last week, DHSS issued vouchers for 493 households, representing 1,151 family members. Approximately $410,086 in assistance was issued. “We are working with retail stores and wholesalers to ensure they keep their shelves stocked,” Muavaefaatasi shared. According to him, DHSS is expecting to issue $1 million total in food vouchers before the end of this month, under the ASDRFA program.

Next week - the first week of January - is the regular issuance of monthly food stamps and WIC for local recipients. “That’s another $1 million in assistance for our people,” he said. “Combine the monthly WIC and food stamp issuance, with the ASDRFA program, and that’s $2.4 million a month of ‘purchase power’ for locals,” Muavaefaatasi pointed out.

The US Department of Agriculture, Food and Nutrition Service (USDA FNS) earlier this year approved American Samoa’s implementation plan to provide additional supplemental disaster recovery food assistance for American Samoa’s low-income residents who continue to recover from the impacts of Tropical Cyclone Gita, and who meet financial and non-financial eligibility criteria established for this assistance.

Federal law provides $18 million to American Samoa for disaster nutrition assistance - through the ASDRFA Program — and the funding remains available for obligation by the territory until Sept. 30, 2020.

More information regarding the ASDRFA program can be found on the DHSS website <Error! Hyperlink reference not valid. or on their Facebook page.