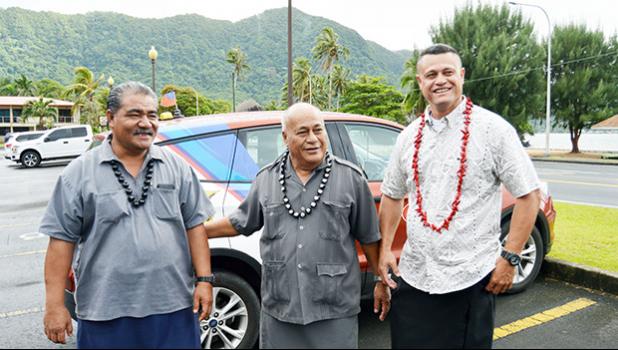 “I really want to see how they came up with these strong accusations …” she says
By
Ausage Fausia
ausage@samoanews.com

Several ECE teachers told Samoa News last week that they’re seeking an attorney to handle their case of not being paid for the 4 weeks they taught the summer program, and they’re suspicious that one of the reasons why they have not been paid is because funds for the program are being misused.

In an exclusive interview with Samoa News at her office in Utulei this week, Mrs. Tinitali explained that the ECE operation is monitored by the Head Start (HS) and every single cent from the grantor has been used according to their requirements.

“The Head Start is monitoring our ECE operation and all other grantees around the United States every month to make sure funds are used according to their requirement,” Tinitali said, adding that “these are strong allegations by some of the ECE teachers and I really want to see how they came up with these strong accusations against the program.”

Tinitali then explained how the ECE program operates.

A ‘Five-Year Grant Cycle Plan’ is presented to them by the HS with funding and requirements.

During the first year of the five-year grant cycle plan, representatives of the HS come down to review all the records and check on how the program operates every single day. HS representatives also conduct interviews with people working on the program especially those dealing with the operation.

“They’re interested on how the operation flows and whether funds are spent accordingly,” Tinitali said.

“I’m glad to announce that … our ECE operation received good credit from the HS and they were satisfied with our performances, the way we operate the program and also how the funds were spent,” Tinitali said, adding that they have all their daily reports ready for review by the HS every day and the status of their reports were outstanding after HS reviewed them.

“So my question to these teachers who raised this accusation of misuse of funds, how did you come up with such information while the HS office did not find any single report of misuse of funds?” Tinitali asked.

She said that she really wanted to see the facts that prove the misuse of funds. She also said that if these teachers can consult an attorney to speak on their behalf on the issue of not paying them for the 4 weeks of the summer program, she, herself can also retain an attorney to act on her behalf if this is the case.

“I don’t know where the allegation comes from but we’re the ones dealing with the funds, reports and run the operation. These teachers’ bodies are only in the classroom while our bodies are here in the office where the decisions are given out on how to use funds and operate the program.”

The ECE director said that they have conference calls with the HS leaders every month and they provide them their daily operation reports and how funds are being spent. She also stated that HS is aware of their operation especially the issue with teachers who did not receive paychecks for the work they’ve done for the summer program.

“As I stated before, HS is working on the process and the funds will only be given to us once HS gives us approval for the funding to pay these teachers,” said Tinitali, adding that she understands that this is human nature — that once money is not coming in people get frustrated and disappointed.

Tinitali further stated that all of the ECE comprehensive services meet all the requirements that are given to them by HS. For that reason, grants are given to the program every year. Without these grants, the program would be closed and unable to operate.

“Without our good performance, HS would never have given us over $1.1 million for the COVID-19 funding; over $300,000 for other purposes, and over $3 million from the Basic Grants.”

When asked if she’s worried about the situation where these teachers are seeking legal services to act on their behalf, Tinitali said, yes.

“I’m worried and at the same time concerned because if the HS personnel become aware of the negative information about the program, they will think that we can’t solve our own problems,” Tinitali said, adding that, “ECE has come a long way and are working very hard to make sure our children will get the best service for their early education, however, it seems that some people are not taking this matter seriously but they want to satisfy their own self instead of working together for a better program.”

Several ECE teachers who spoke to Samoa News regarding this issue stated that they wanted to let their attorneys act on their behalf so that their job will not be affected if they voice their concerns regarding many issues happening in the operation.

One teacher told Samoa News that the issues about them not being paid will not affect her duty as a teacher to teach and educate young children. Working as a teacher for over 15 years, she told Samoa News that they have been facing these problems year after year. Not only with not enough supplies to educate children, but sometimes they’re neglected, despite the hard work they’re doing.

“As you look at our theme, Touching lives of our children today will impact the community tomorrow, that’s what we’re doing right now. We educate our children to become good leaders of tomorrow.”