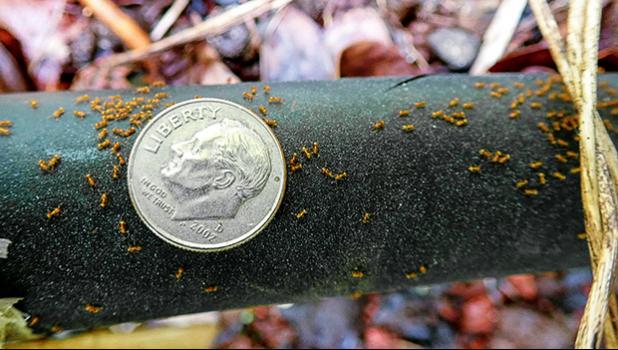 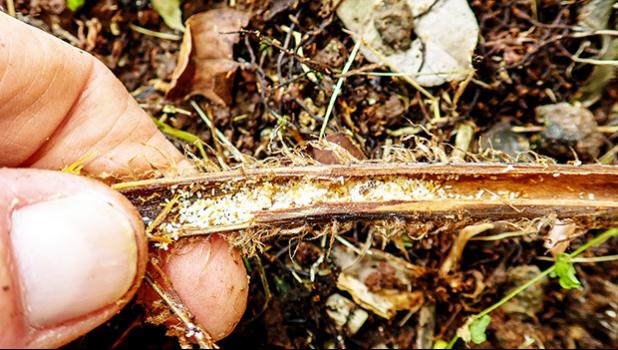 “The little fire ant is much smaller than the tropical fire ant, which first appeared in American Samoa 16 years ago, but its sting is similar in the pain and itchiness it causes,” said ASCC Agriculture, Community and Natural Resources (ACNR) Entomologist Dr. Mark Schmaedick. “Unlike the tropical fire ant, the little fire ant often forages and nests in trees. This habit makes it a serious nuisance to farmers and gardeners who may get stung by numerous ants falling onto them as they prune or harvest their crops.”

The ant is also a danger to local ecosystems as it is an aggressive predator and competitor, attacking native ants and other insects, reptiles, and baby birds. “The little fire ant causes indirect damage to plants through its relationship with sap sucking insect pests such as aphids, mealybugs, scales, whiteflies, and psyllids,” said Dr. Schmaedick. “As they feed on their plant hosts, these insects secrete a sweet liquid called honeydew, which is highly attractive to ants. The ants harvest this honeydew from the sap-sucking insects and in exchange the ants protect them from the natural predators that normally keep the pest populations in check.”

The new ants have been detected only in the Tafeta area, but it is likely that there are infestations elsewhere on Tutuila. Because of the harm it may cause to agriculture, the environment, and the economy of American Samoa, local officials are hoping to contain and eradicate the little fire ants before they spread and become established. They are asking the public to report any infestations of little fire ants they may observe.

Little fire ants spread very slowly on their own, but can spread quickly by hitchhiking on items that people carry around such as potted plants, plant cuttings, tiapula, banana suckers, rolled mats, coconuts, firewood and other objects that may have been in contact with the ground. People who live in areas infested with little fire ants are asked to please avoid transporting these kinds of items to other areas of the island in order to avoid spreading the little fire ants.

Anyone who has questions or who wishes to report a possible infestation of little fire ants can call ASCC-ACNR Land Grant at 699-1575.