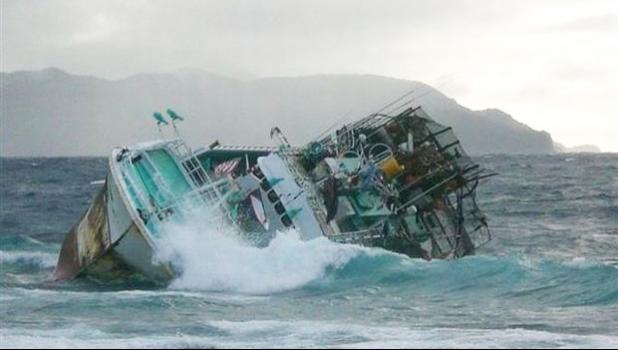 Va’amua made the revelation at last week’s, three-day, 169th Meeting of the Western Pacific Regional Fishery Management Council at the Ala Moana Hotel in Honolulu. Va’amua is the territorial government’s representative on the Council.

As previously reported by Samoa News, the Taiwan-based fishing vessel SeaHawk #68 ran aground in May 2015. According to a federal investigation report released in February last year, some crew members suffered minor injuries and a total loss of the vessel and cargo was valued at more than $500,000, but no pollution was reported. The report cited several reasons for the vessel running aground.

During the American Samoa fisheries presentation at the Council meeting last week, Va’amua said the US Coast Guard helped with removal of oil, “but the vessel is still on the reef, causing a lot of damage to our reefs.”

Last December during high winds and high surf in the territory, Va’amua said the vessel moved 40-feet closer to the shore. “And as it moves closer to shore, the vessel is dragged along the reef, and did a lot more damage to the reef,” he said.

While attending the annual US Coral Reef Task Force meeting more than two weeks ago in Washington D.C., Va’amua said he requested some resources or funding from federal agencies to help remove this vessel.

A request was made to the Coast Guard in Washington D.C and Va’amua said he was informed that the agency’s Honolulu office would be contacted; and last week Wednesday, he met with US Coast Guard commander Rula Deisher, who sits on the Council.

Deisher told the meeting that the oil has been removed and the US Environmental Protection Agency and the Coast Guard have determined that it’s not an oil pollution problem, “so we don’t have additional funding at this time, to do anything else with the vessel.”

Va’amua sought any suggestion from the Coast Guard or any other agency to get some funding assistance. He recalled several years ago, when 11 longliners were grounded in the Bay area and the Coast Guard helped remove these vessels with funding at $38 million.

Va’amua said the vessel grounded off Nu’uuli is a problem and “as long as this vessel is on the reef, every time we have high winds and high surf, this vessel continues to move closer to the shore, dragging on our reef, doing much more damage … [it] is a major problem with this.”

Responding to a question from the Council, Va’amua says the vessel’s hull is fiberglass “and that makes it more worst” because every time there’s high winds and high surf, the vessel is pushed towards the shoreline, with the vessel breaking up in pieces and this debris ends up on the shore.

Another American Samoa member on the Council, Taotasi Archie Soliai of StarKist Samoa echoed Va’amua’s concern with the grounded vessel saying, “From what I understand, a company did an assessment on removal, and its going to cost about $3 million to remove that vessel because it’s fiberglass, it’s not something, that you can sink in the ocean.”

He also said the vessel is grounded off the shore of his village of Nu’uuli, a “beautiful village.” That statement prompted laughter from those in attendance at the meeting.