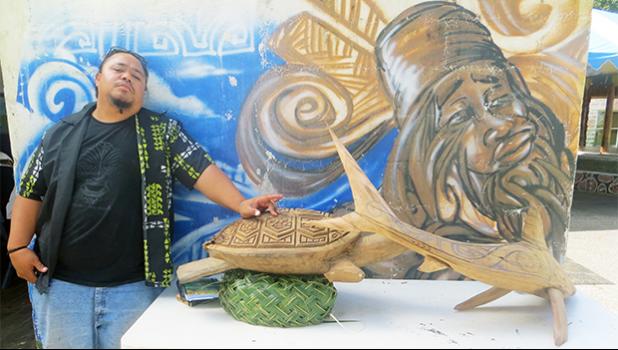 Tile Talamoa Tuala-Tamaalelagi is one of the local artists at the Jean P. Haydon Museum who helped out with the Children's Cultural Maintenance Summer Program that closed last Friday.

When asked about his experience working with the children this year, Tuala-Tamaalelagi told Samoa News that one of challenges he faced was the diversity of the group.

“The kids were from all over,” he said, adding that with the young ones, he couldn’t just throw them a carving project and expect them to complete the task, especially considering the tools needed to carry out the job, and the concern that the kids might get hurt.

Tuala-Tamaalelagi then came up with the great idea of having the little ones learn the Haka, or Samoan war dance, while the older kids were assigned to tackle carving projects.

He said he was confident that the kids would absorb everything they were taught and once the summer program was over, they would have gained a deeper appreciation for Samoan art and what it’s all about.

He shared that he himself was once an art student, trained under his role model and mentor, Sven Ortquist, a master carver renowned throughout the Samoan Islands — his work resonates the legends of Samoa and the Pacific.

Ortquist passed away in 2013 and left some of his work behind with the museum, where he worked for many years. Tuala-Tamaalelagi is working on restoring one of those pieces, ‘the turtle and the shark’ (pictured) in an effort to put it on display and share it with the community once again, especially the children.