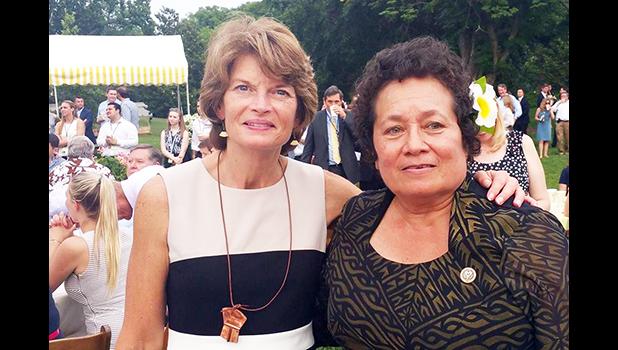 MIss American Samoa Incorporated (MASI) will be celebrating its silver jubilee later this year in September, to coincide with the 2017-2018 Miss American Samoa pageant set to be held on Sept. 15th.

MASI president Simeafou Imo told Samoa News earlier this month that planning has already started for MASI's 25th anniversary celebration, which includes a slideshow under the theme: “Toe Tepa Tasi”, looking back and honoring all the former beauty queens who held the Miss American Samoa title.

Reigning Miss American Samoa Antonina Lilomaiava will relinquish her crown that night, but not before completing her library project at the LBJ Medical Center's Pediatric Ward for which her sponsor, Samoa Stationary and Books (SSAB), in addition to Lt. Governor Lemanu Peleti Mauga, have agreed to donate reading material for kids seeking medical assistance there.

Tonight, the MASI president and Ms. American Samoa will be traveling to Washington State to represent the territory at the Northwest Tatau Festival, the first activity in the week-long agenda scheduled for the Samoa Flag Day celebrations in the Evergreen State.

"Thank you Governor Lolo Matalasi Moliga and Lt. Governor Lemanu Peleti Mauga for your support and help in making all of this possible," Imo said.

For this year's pageant, Imo has announced that four young ladies have already expressed interest in competing.

Applications can be picked up at either Vai's Flowers and Gifts in Nuuuli, or the American Samoa Visitors Bureau (ASVB) office in Tafuna and the deadline to apply is July 31.

"This gives our sponsors - and contestants - ample time to prepare for the Sept. 15 pageant," Imo said.

American Samoa HIV/AIDS, STD Board co-chair, Father Kelemete Puaauli is encouraging local residents to stop by the Dept. of Health office in Fagaalu to get tested for HIV/AIDS and other sexually transmitted diseases.

Yesterday, June 27, was National HIV Testing Day in the US.

Locally, Fr. Kelemete told Samoa News, the call to get tested extends throughout this week, something that is done annually every last week of June. This year's theme is: Test Your Way, Do It Today!

According to the Centers for Disease Control and Prevention, about 1.1 million people in the United States have HIV, and 1 in 7 of them don't know it. "Young people are the most likely to be unaware of their HIV infection."

The CDC recommends that everyone between 13 and 64 get tested for HIV at least once as part of routine health care. However, those who are more at risk of getting HIV than others, should be tested at least once a year. "Sexually active gay and bisexual men may benefit from more frequent testing (for example, every 3 to 6 months)," the CDC urges.

Fr. Kelemete said that although the emphasis on testing is being placed on this week, tests can be conducted any time during the year.

The tests are free and confidential.

"We are of the community and for the community," Fr. Kelemete said, adding that their role is to encourage participation from everyone, and promote awareness in the territory.

An earlier report published by Samoa News notes that there are two cases of HIV in the territory and both are from off island.

"We are available to conduct outreach and presentations for youth groups, villages, organizations, and churches," Fr. Kelemete said. "Just call the Public Health office in Fagaalu at 633-AIDS to set up a time and date."

The HIV/AIDS, STD testing is a collaboration between the Board and the local Department of Health.

The CDC notes, "Knowing your HIV status is important for your health. If you are living with HIV, you should start treatment as soon as possible. HIV medicine can keep you healthy for many years and greatly reduces your chance of transmitting the virus if you take it the right way every day. And if you’re HIV-negative, you can take steps to prevent it."

GET YOUR FREE FLU SHOT TODAY

This Friday is the last day to get free flu shots, administered by the Department of Health's Immunization Program.

Consent forms for the little ones in daycare centers across the territory, as well as students attending summer school have already been sent out to parents.

The DOH crew will be at the Boys and Girls Club today, at South Pacific Academy and SPICC in Faganeanea tomorrow, and at Manumalo Academy on Friday. Walk-ins are welcomed.

DOH teams are also out in the villages, as well as the local community health centers in Amouli, Leone, Tafuna, and Fagaalu.

Local residents are encouraged to get their free flu shot while it is still available.

According to the Centers for Disease Control and Prevention, a yearly flu vaccine is recommended for everyone 6 months and older. "This season's flu vaccines are reducing risk of illness by nearly half," the CDC reports.

The flu is a contagious respiratory illness caused by influenza viruses that infect the lungs, throat, and nose, and can cause mild to severe illness which can possibly lead to death. Medical professionals say the best way to prevent the flu is by getting a flu vaccine every year.

More information can be obtained by calling the DOH Immunization Program at 699-8464.

All farmers must complete over eight months of training and hands-on experience demonstrating skill and knowledge of hydroponic systems, prior to earning a fully equipped greenhouse built and funded by the project.

This past Monday at the Chang Farm in Iliili, PYCD celebrated the success of new hydroponic farmers. "These participants have completed one year of hands-on hydroponic training that has culminated in the construction of their new greenhouses and hydroponic growing systems."

The event included a tour of the Chang Family's new greenhouse and growing system, a slide show of the training and construction, and a presentation by guest speakers and participants in the training.

Washington, DC – Tuesday, Congresswoman Aumua Amata attended President and First Lady Trump’s bi-partisan summer picnic last Thursday. She attended the picnic with her family, and with other members of the House and the Senate.

The Picnic has been an annual tradition since the Reagan administration. The theme normally pays homage to the President’s home state.  The theme this year was Picnic in the Park, modeled after a summer evening picnic in New York’s Central Park.  After the shooting of Rep. Steve Scalise earlier in the month, the picnic was a great chance for both sides to come together and show unity.

President Trump stated “Tonight let us enjoy the company of friends and the comfort of our loved ones.  And tomorrow, let us continue to do the people’s bidding and create the optimistic future our citizens so richly deserve.  I want to thank you all for being here tonight.  It's a very special evening.  Beautiful evening.  And I just want to say God bless you, and God bless America.”

“I was so happy to attend the picnic, a great chance for all of us to forget our differences and bond over what makes us American.  It was a great chance for me to discuss with my colleagues the Interior budget, healthcare, and infrastructure issues that American Samoa faces in a relaxed leisurely setting,” stated Amata.