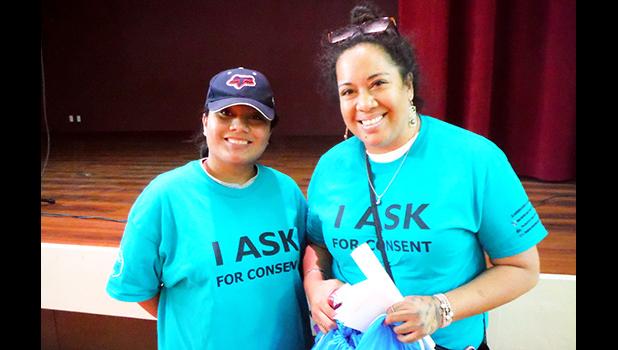 Pago Pago, AMERICAN SAMOA — One of the institutional learning values of the American Samoa Community College (ASCC) is that its graduates acquire skills as critical thinkers, and, among other specific qualities, “they recognize the need for multiple voices and seek opportunities for those voices to be heard.” The SAAM (Sexual Assault Awareness Month) Poetry Slam in early May provided a forum for voices not typically heard, namely those of American Samoa’s young people, to speak loud and clear in a safe, non-judgmental setting.

In collaboration with ASCC, local advocacy group the Alliance for Strengthening Families presented the Poetry Slam as the concluding event of its Sexual Assault Awareness Month in April. To facilitate the event, the Alliance partnered with Maluseu Doris Tulifau, founder of the international young feminist group Brown Girl Woke.

For the last several years, Tulifau has done work in Samoa and American Samoa empowering young people from high school through college age to use mediums of self-expression that include poetry, song and acting. Tulifau especially encourages the expression of thoughts, feelings and experiences on subjects traditionally considered too controversial to be spoken of openly, but still need to be addressed, which intersects with the work of the Alliance for Strengthening Families.

“In both Samoas,” reflected Tulifau, “we have the same cultural and religious barriers that don't allow the youth to speak. I would say the only slight difference is that American Samoan youth have more exposure to American culture.  When I was doing my workshops here in American Samoa prior to the Slam, some of the young people shared some pieces that spoke about injustices happening in the US, for example about Trump, the wall he’s trying to build, and the Black Lives Matter movement. In general, I would say the young people in both Samoas are well aware of what's going on not only at home, but also around the world.”

For the Poetry Slam, ASCC students shared the stage with participants from Samoana, Tafuna, Leone and Faasao-Marist High Schools. The poems performed conveyed a wide range of perspectives and feelings on issues that impact young people, with the poets did not shying away from subjects such as suicide, teen pregnancy, drug and alcohol addiction and abusive family relationships. During short breaks between performers, the organizers screened the two winning videos of a public service announcement contest for high school students.

These short videos focused on awareness of abuse and the Alliance motto of, "See something, say something." To keep the event moving along, Tulifau shared MC duties with Judy Mata’utia, Alliance Program Specialist.

When the judges’ scores were tallied, among the ASCC performers Stina Scanlan was awarded first place, with second place going to Anncelitta Meli and third place to Losalini Biuloto. Other poets from the College who shared their work included Jedi Fuiava, Douglas Brandt and May Ve’e.

As for the high school participants, Tulifau explained that each of them was provided with their point score and notes from the judges, but in order to discourage them from viewing the event as a competition, the only prizes awarded were gift cards and other items donated by the Slam’s sponsors.

The event committee behind the event – the Alliance for Strengthening Families, Brown Girl Woke, and the ASCC Fresh Print Club – expressed their gratitude to their sponsors for providing prizes and other support.

Recognition also went to Health and Human Services chairman Derek Helsham and outreach counselor Katrina Garcia-Helsham for their role in organizing the Slam, along with Lisa Bartley and Mikaela Saelua of Leone HS, Dakota Autumns of Samoana, Ms. Langkilde of Tafuna HS, and Dr. Kamo Koloi of Faasao Marist.

For more information on the services offered by the Alliance, as well as its activities, call 699-0272.