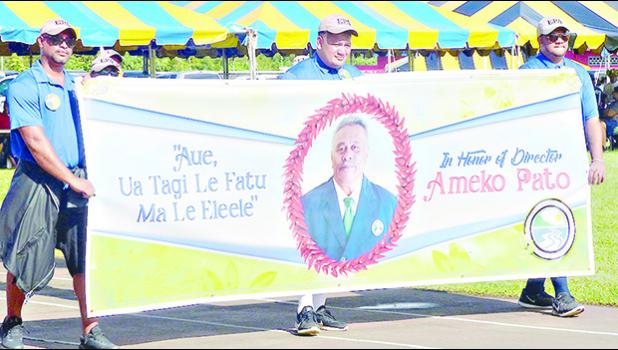 Director Pato led AS-EPA with strength and compassion.  He remained true to the agency’s mandate: to protect public health and the environment.  Pato was passionate about his job and cared deeply for the American Samoa community he served.  This was evident in all things he did, whether it was advocating for AS-EPA programs before government leaders, conducting enforcement, carrying out community service projects, or raising awareness of environmental issues in the Territory.

Under Pato’s leadership, AS-EPA programs and services excelled.  In the six years he served as Director, the agency achieved countless successes, most notably in the areas of compliance assistance and monitoring, enforcement, and public outreach.

Since January 2013, AS-EPA has met and remained compliant with all of its federal grant conditions.  This is a testament to Director Pato’s strong leadership, fiscal responsibility, and what he described simply as “honesty.”

AS-EPA’s recent successes could not have been possible without its dedicated staff.  Director Pato made it his top priority to increase the agency’s local technical capacity and provide professional development opportunities for everyone who worked for him.  He took the time to get to know each of his 35 employees and hand-selected new hires based on their educational qualifications and willingness to work hard.

Director Pato was perhaps best known for his ability to bring people together.  He could connect with individuals from all walks of life and backgrounds.  He used this skill to foster good working relationships within the local community, as well as with the off-island environmental community.  As news of his passing spread, AS-EPA received condolences from his friends and colleagues all across the Pacific and the United States.

Ameko Pato was surely one of a kind and will be dearly missed.  He is survived by his beloved wife of 35 years, Dr. Rosevonne Makaiwi-Pato, their five children, and six grandchildren.  His Final Mass will be held today at the St. Joseph’s Co-Cathedral in Fagatogo, American Samoa.

A procession from the hospital to the church begins at 8:00 a.m. and Mass begins promptly at 10 a.m.  Pato will then be laid to rest at his property in Vaitogi, American Samoa.  AS-EPA extends its deepest condolences to all of Director Pato’s loved ones, near and far.