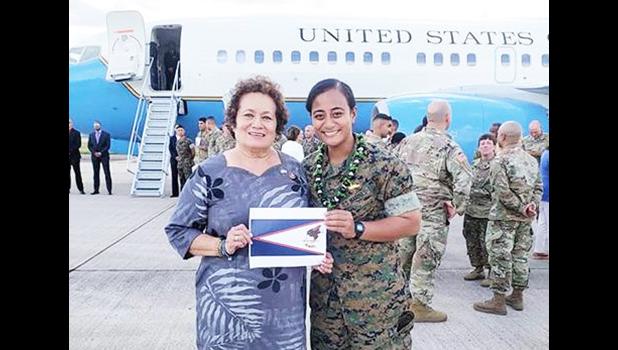 “A special happy birthday to our United States Marine Corps, and congratulations to all our Marines,” said Aumua Amata. “Thank you for your service! The Marine Corps has a proud history that began when they were established by the Continental Congress in 1775. Since then, the Marines have been a part of our country’s history every step of the way. God bless and Semper Fi!”

The Marine Corps was founded on November 10, 1775, when the Continental Congress ordered that two battalions of Marines be raised for service as landing forces with the fleet. Marines have participated in all wars of the United States, being in most instances first, or among the first, to fight. In addition, Marines have executed more than 300 landings on foreign shores and served in every major U.S. naval action since 1775.

The U.S. Marine Corps is structured according to the National Security Act of 1947 and its amendments of 1952. The commandant of the corps has coequal status with members of the Joint Chiefs of Staff in all matters pertaining to the corps. The corps is composed of two operating forces, the Fleet Marine Force, Pacific (FMFPAC) and the Fleet Marine Force, Atlantic (FMFLANT); a supporting establishment for recruitment, training, supply logistics, and maintenance of bases, installations, and schools; and the Marine Corps Reserve.

The Marine Corps emblem is the Western Hemisphere superimposed on a foul anchor and surmounted by a spread eagle. The Corps motto is Semper Fidelis (Latin: “Always Faithful”), which is also the title of the Corps march, composed by John Philip Sousa. Perhaps even more familiar is “The Marines’ Hymn.” The Marine Band, the oldest musical organization in the U.S. armed forces, is known as “The President’s Own” because of its privilege of performing at all state functions at the White House. The official colours of the Corps are scarlet and gold, but forest green enjoys semiofficial recognition. The distinctive dress-blue uniform of Marines, with its standing collar, is well known. From the standing collar—descended from the tall leather neckpiece of the 18th- and 19th-century uniform—comes the traditional nickname for Marines of “leathernecks.” The forest-green service uniform was introduced in 1912. In naval formations, Marines have the privilege of forming on the right of line or at the head of column, the traditional places of honour and seniority.