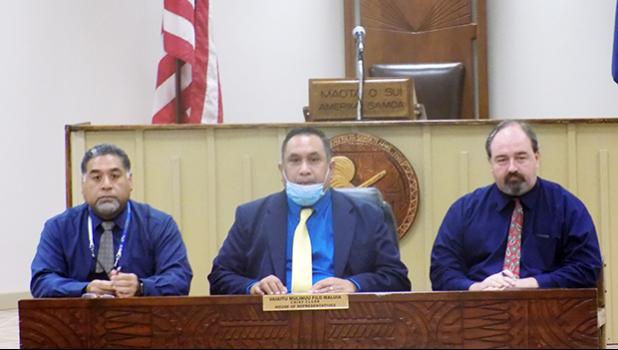 "... if the Fono wants to change the law, it’s up to the Fono."
By
Ausage Fausia
ausage@samoanews.com

Pago Pago, AMERICAN SAMOA — The Legislature has the full authority to change the law that allows the American Samoa Economic Development Authority (ASEDA) to issue bonds.

This was the statement by the American Samoa Attorney General Fainu’ulelei Ala’ilima Utu during a House Hearing to approve three new members of the ASEDA Board.

The hearing chaired by House Economic & Development Committee chairman, Rep. Samuel Ioka Ale Meleisea and the three new board members who were later approved by the House of Representatives.

During the hearing, Rep. Vailiuama Steven Leasiolagi asked the three new members of the ASEDA Board for an opinion regarding a proposed bill the House is prepared to introduce. The proposed legislation, according to Vailiuama is that before the ASEDA Board moves to make a commitment of bond funding, it has to come first to the Fono for approval.

Vailiuama furthered explained that the old ASEDA Board has an understanding that they don’t need Fono approval when it comes to the spending of bond funds.

King shared his opinion and told the committee that whole purpose of ASEDA is to go out and look for funding to fund projects. He believes that it takes the whole group of people to make a good decision, but not just one side.

Ala’ilima-Utu reminded faipule that the Fono already approved the law on the issues of bond funding.

The AG cited the statute; A.S.C.A 11.1904 (a), which states that, “the authority that the ASEDA Board may issue bonds here from time to time from further authorization from the legislature subject to the procedure and restrictions in this chapter.”

“So basically that’s what the Fono approved, however, if the Fono wants to change the law, it’s up to the Fono. That’s how the system works, is the Fono would pass a bill and the Governor will review and he would decide whether to approve it or to veto it,” Ala’ilima-Utu said, adding that, “that’s the great thing about our democracy is that you have your position and the governor would have his position and we work together for the betterment of our people.”

The AG said that this is a great responsibility for them as members of the ASEDA board to serve the people.

“We live here, our families live here. We pay taxes, our children will pay taxes and we don’t take this matter lightly,” Ala’ilima-Utu said.

Rep. Avagafono Vaimaga Maiava said that the issue about the ASEDA bond is a “big financial burden for our government,” and he wanted to know if the ASEDA Board had any financial plan in dealing with the payment of the bonds.

“This is a big issue in regards with our territory with this big funding from the ASEDA bonds,” Avagafono said, adding that he’s very concerned on how the current ASEDA Board and future boards will come up with plans to pay these bonds in full if the government doesn’t have the finance to pay these bonds.

King said that they are able to review what the previous board has done and they’re now following that path.

“I think it is critical for us to take a look at the plans the previous board has and our first step is to follow through and make sure those measures recoup the revenues to be able to pay off these bonds,” King said.

He further stated that they need to review the plan again and again to see if there’s a better way to move forward with the whole process. He told the committees to please allow them a chance to go back to the office and to be able to work closely with the whole ASEDA board before they return at a later time with better answers.

Ala’ilima-Utu added his opinion to the question and said that the first series bond was issued back in 2015 and to his understanding is that the payment had being made on time. He said that after the Fono passed the law to allow the ASEDA to work with these bonds, the board at the time followed the law and everything was in place.

“The Fono has the authority to made laws. Whatever laws you consider as to be the best interest of our people you should made those laws but again, the Governor will review it before he made a decision whether to approve it or not,” Ala’ilima-Utu told representatives.

The three board members were informed by committee members that there was a case where some lawmakers take the ASEDA Board to court for failure to comply with the statute that passed for the bonds.

Fofo faipule, Andra Tereise Samoa said that every time she heard of the bond, she always thought abut the future of the territory and the future generation.

“My children and my grandchildren are going to take up the debts and the value of the investment doesn’t go anywhere,” Samoa said.

She agreed with the AG’s comment that the Fono has the authority to change the law, however when the Fono approved the law, ASEDA will come back to the Fono for approval on the investment because investment come back to us, imposing the balance on the future generation.

He’s now appointed an acting Chief Immigration Officer (CIO) at this time and he also made some changes for improvement in the supervisors staff. He said before the changes were made, he had a “good talk” with the staff where they discussed their obligation to faithfully enforce the immigration laws impartially and fairly and he thinks “the office is moving in the right direction.”

For the AG’s office role, Ala’ilima-Utu said that he was very happy that his office assisted in filing the petition for a case in the U.S Supreme Court for the large vessels issues.

“We don’t have that many cases in which we petition in the highest court of the land so that is a very special petition,” the AG said

He also said that his office has also obtained the legal counsel for the American Samoa Government (ASG) and ASG officials in the Federal District Court suit in the U.S District Court in Washington D.C.

The new AG also stated that his office is hiring 3 more new attorneys from off island to help their operation. The 3 new attorneys are scheduled to arrive on island from the next repatriation flight.

They advertised the positions locally but no one wanted to apply.

SELLING OF THE 200 GIGS FROM THE HAWAIKI CABLE

Tuala-uta Rep. Larry Sanitoa told the new members of the ASEDA Board that the House of Representatives is very concerned after they were told that it has been three years since American Samoa launched the Hawaiki undersea fiber optic cable and none of its 200 gigabytes (GIGS) of bandwidth has been sold.

Sanitoa told the witnesses that according to faipule from the Retirement Fund and ASTCA, the problem stems from the fact ASTCA cannot sell any of the 200 gigabytes from Hawaiki to a foreign country — he said that this is not ASTCA’s fault, the restriction is part of the bond covenant.

Sanitoa cited the paragraph of the bond agreement which stated that, “the proceeds from the sale of the series 2018 bond will be used for the purpose of financing the cost of the construction of various capital projects in the territory including but not limited to a new building of the legislature, executive branches and accusations to provide band services within the territory.”