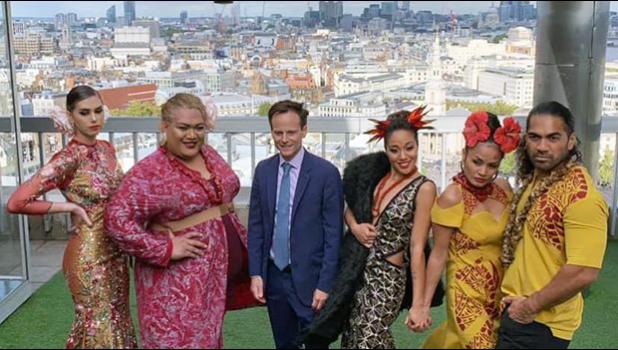 Pago Pago, AMERICAN SAMOA — All the world’s a stage. And for a moment, the stage — and the world — belonged to local transgender fashion designer Berta Laumoli, a school teacher from Vailoatai (pictured, 2nd from left).

Berta’s collection, Fierce Island Couture. lived up to the hype and those who were fortunate to witness the 2019 London Pacific Fashion Week (LPFW) in person — and through live streamed videos — were definitely pleased.

Peteru Gago-Lam Yuen, who is in London as part of an entourage of American Samoa supporters, wrote in a social media post that the spectators were “wowed and amazed at the level of creativity” …and Berta “represented American Samoa very well, with her unique talent in fashion design.”

One of the models wearing an item from the Fierce Island Couture collection, by local designer Berta Laumoli, showcased during London Pacific Fashion Week. [photo: courtesy]

Berta’s family and friends, as well as her sisters from the Sosaiete O Faafafine I Amerika Samoa (SOFIAS) — of which she is a member — rallied behind her as the cameras were rolling, and the world watched. And the show didn’t disappoint.

Reigning Miss SOFIAS Vanessa Simanu was one of the models, and Berta’s proud mother couldn’t resist getting on stage to ‘boogie’ with her wonder child.

Berta’s line-up included a Samoan taupou ensemble, featuring the traditional tuiga, and an ‘ie toga. Other designs — for both men and women — incorporated the use of the tifa, elei motifs, and dried and preserved leaves in striking colors like red, fluorescent green, and royal blue.

Thousands worldwide have viewed the live videos of the event, showing Berta’s models performing the Samoan siva while they graced the stage. Well wishes and congratulatory messages have been pouring in, for the Pava’ia’i Elementary School teacher whom the LPFW organizers have dubbed, the first LGBT “emerging fashion designer” to showcase her creations at the annual event.

In her own words, Berta says her passion to design is a way to get people to “see beyond the physical appearance”, and how “fa’afafine can be a positive change in the world through fashion and talent.”