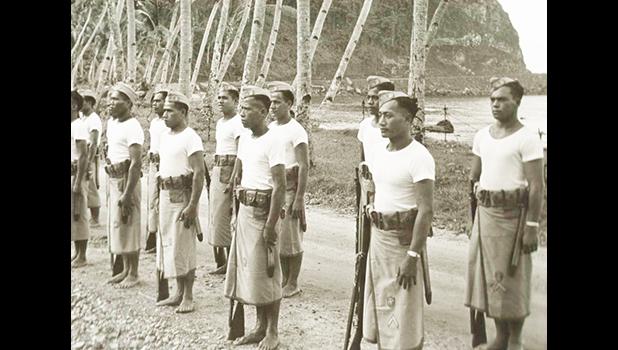 Triangle, VIRGINIA — Founded in July 1941, American Samoan reservists were initially part of the 7th Marine Defense Battalion, based at Tutuila, American Samoa. With an authorized strength of 500 men, they patrolled beaches, manned coastal defense guns, and defended the home island.

Known unofficially as the “Barefoot Marines,” their unique dress uniform consisted of a khaki ie lavalava. A small red felt shield patch, with an embroidered gold Marine Corps emblem was sewn to the lower end of the garment as well as the Marine’s rank chevrons.

Enlisted men wore M1923 cartridge belts on their waist to pair with their M1903 Springfield rifles. A simple white undershirt and a khaki summer service garrison cap (with red piping and red patch) completed the tropical uniform. No shoes were worn.

The 1st Samoan Battalion was active until January 1944, when the companies were slowly disbanded over the course of the year (into 1945) and they were reassigned to Marine Barracks, Naval Station, Tutuila, Samoa Islands.

While short-lived, these fascinating Marines played a special part in Marine Corps uniform history, marking the first time the wearing of shoes was against regulations!

Marine uniforms are often appreciated for their history and refined simplicity. But, when it comes to the uniforms of the World War II era, it would be hard to find a more stripped-down or simple ensemble than that of the 1st Samoan Battalion.