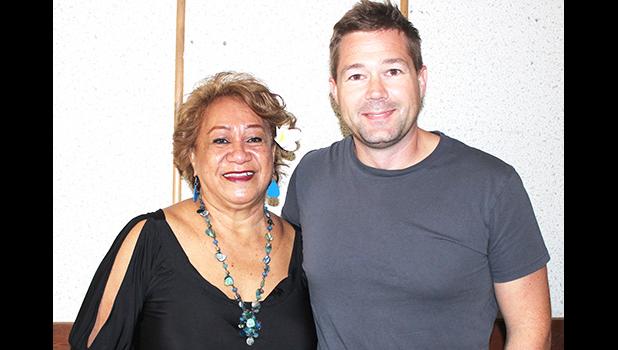 Pago Pago, AMERICAN SAMOA — Fatima Langkilde with her cousin, Johannes Langkilde, a television journalist from Denmark, who is conducting a research for a book about the roots of the Langkilde family — from Denmark, to Samoa, and American Samoa.

Johannes is the evening news anchor for Danish Broadcasting Corporation and had served as bureau chief for the broadcaster in Washington D.C.

It was during this assignment, a few years ago, that he met his cousin, the late Fagafaga Daniel Langkilde, who was attending the Democratic National Convention in Philadelphia, for the US Presidential race.

“Meeting Fagafaga was the starting point for me to really look more into this whole family story,” Johannes said yesterday during a Samoa News/ KSBS-FM interview at the KSBS studio.

He and his family arrived in the territory last week, following a visit to Samoa, where he conducted more research on the Samoa portion of the book. The family is returning to Samoa on Sunday.

“I decided to write the book because I think it’s a fascinating story,” he said. “And the story all began with a pistol duel — allegedly — back home in Denmark, where a young [solider] Lieutenant Hans Alfred Langkilde had an argument with a German soldier, over a woman.”

And all this took place in the 18th century — about 1864 or 1865. At the time, there was a war ongoing between Denmark and Germany.

“Supposedly, the young Langkilde kills this German soldier and he has to flee Denmark, which he does, on a ship and he ends up — of all places — in Samoa, off the shore of Falese’ela (on Upolu island),” he explained.

“The young solider jumps off the ship, swims to shore and there he meets a [Samoan] chief’s daughter in a missionary's house and later marries the chief’s daughter, and had five children,” he continued. “It’s like an epic love story, actually.”

As a journalist, Johannes said writing and telling stories is part of his life “and I’ve decided that this is one of the best stories that I can ever tell. It’s a personal story, a family story. And it’s a love story, it’s dramatic.

“It’s got everything in order to tell a good story. So I wanted to write this book,” he said, adding that he continues to gather information— during the research phase — about something that took place more than 200 years ago and “it’s quite a task.”

Research involves looking into a lot of archives in Denmark, and internet research. And when he returns to Samoa, he plans to visit the Catholic Church which he says has quite an extensive archive, as well as archives with the Samoa government and the LDS church.

“But being here is a part of me experiencing what Samoa is like today, talking to my family, trying to gather bits and pieces because everybody knows a little bit, but no one knows everything,” he said.

“And so I’m trying to write a book, that would be the best obtainable version of the truth. When you write about something that started in the 18th century, it’s difficult but I’m doing my utmost to be accurate,” he added.

Johannes hopes to have the research part of the project done in the next 3- 4 months, followed by the actual book writing, which he hopes will be done within a year’s time.

It’s also his hope that what he’s doing would encourage others to write about their family roots, and to share such stories with current and future generations. “It’s so important to know your roots,” he said. “My dream is, this book should be an epic movie. There was a war ongoing at the time between Denmark and Germany. All the elements for a movie are there.”